LIVE RAW COVERAGE 10/31: Aftermath of Hell in a Cell, plus THE WWE HALLOWEEN SPOOK-TACULAR!

Sound off in the comments below and
Join our Live Viewing Party! 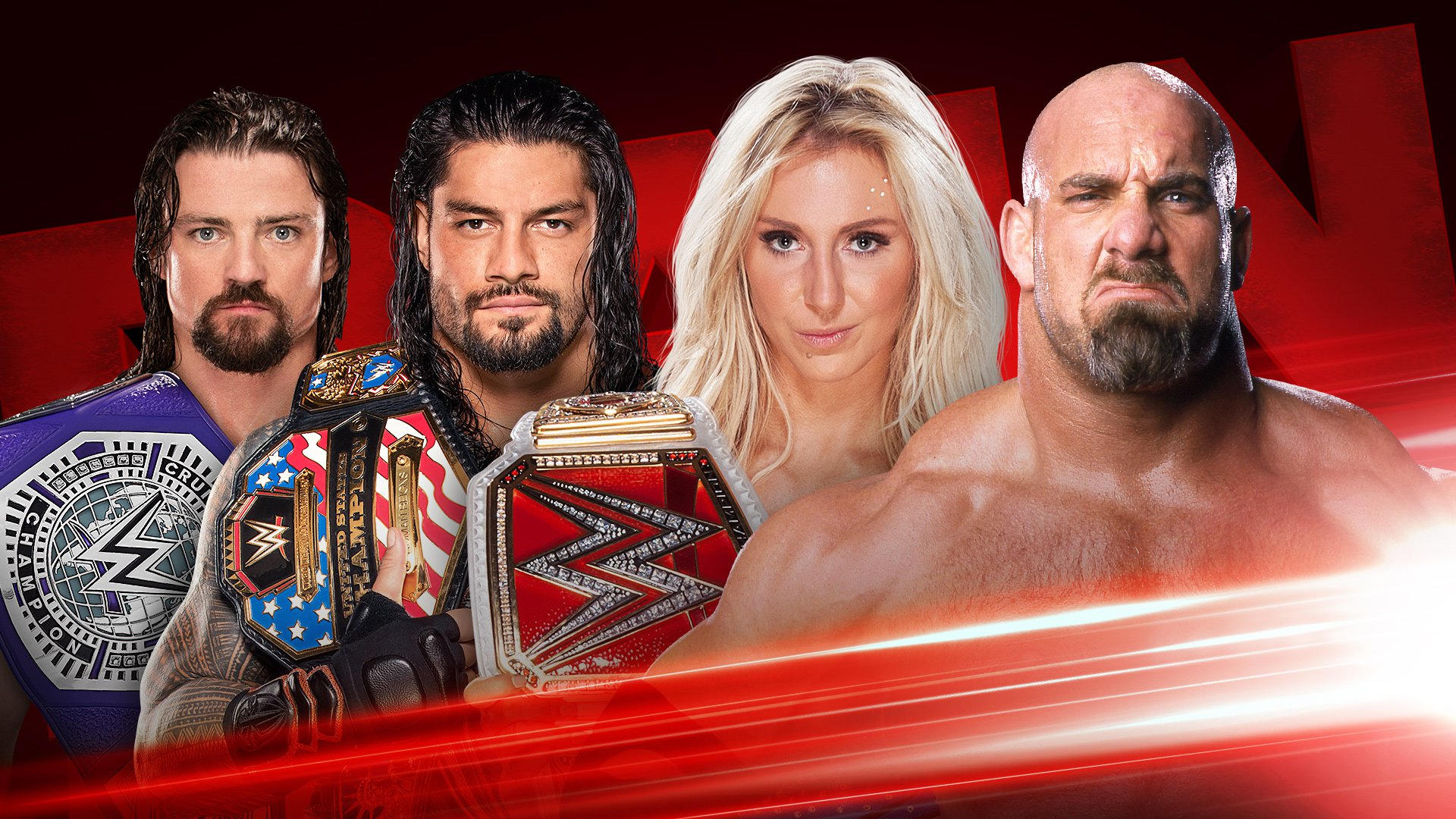 Tonight, we sort through the aftermath of Hell in a Cell.

Charlotte is crowned Queen once again,

Roman Reigns is still a dick,

and Goldberg shows up, probably wearing a costume or something,

because it's the WWE HALLOWEEN SPOOKTACULAR!!!

And that means we're definitely going to get at least three matches
that look something like this:

We kick things off with Bill Goldberg coming to the ring.

He's wearing a different zip-up jacket tonight. This one has a hood.

They're hiding his current physique from us, and it makes me frightened.

HE IS SWEATING SOOOOOOO MUCH.

Psst ... Hey Bill, if you're a little warm, how about taking that jacket off?

The "Goldberg" are pretty deafening here, wherever here is, since it's not Minneapolis.

Goldberg barely gets out a greeting to the crowd before Heyman interrupts him.

He says that Brock's pissed about the Goldberg chants, and so is he.

Heyman says that Goldberg can't think that he poses a physical threat to him, so he feels comfortable getting in the ring.

But he says he didn't come without backup.

He says that not only is his client a beast, but he's an impatient beast.

He calls for Brock's music.

It plays, but Brock doesn't enter.

He talks shit about Goldberg's kid and says that Brock's going to beat him at Survivor Series, and Goldberg starts physically threatening Heyman.

Rusev's music hits, because Vince has decided that Rusev is no longer of use to him and he's going to bury Rusev so deep that sunlight will never touch him again.

Rusev comes down to the ring and says that he doesn't thing Goldberg has what it takes any more, and that he thinks Goldberg is afraid of him.

Goldberg no sells it, because of course he does.

Rusev throws another punch, but Goldberg blocks it.

He tries doing his high knees to the gut, but he falls over.

He tries the knee thing again, successful this time, and gets Rusev up for the Jackhammer.

Then he hits a Spear on Paul Heyman.

ENZO AMORE vs LUKE GALLOWS
in a "Trick or Street Fight"

There are pumpkins all over the ring.
It's going to be one of those.

Enzo and Cass are dressed up as Buzz and Woody.
They do some legitimately entertaining Halloween-related schtick.

The match starts with Enzo beating on Gallows with a plastic skeleton and forcing him to bob for apples.
It's going to be one of those.

Back from the break and we have no idea how this happened, but Gallows is in control now.

He reaches into a carved pumpkin, pulls the guts out and rubs them in Enzo's face.

He beats on him with a Candy-Corn-Colored Kendo Stick.

Enzo dodges another swing, dropkicks Gallows' knee, hits a Bulldog, is about to hit Gallows with a pie, when Anderson gets his attention standing on the apron, so he hits him with the pie instead.

Then Big Cass big boots him off the apron through a table that is covered with candy.

Enzo kicks Gallows right in the um, pumpkins, Cass puts a pumpkin on his head, and Enzo hits a DDG from the second rope.

This was actually pretty entertaining.
I can't believe I'm saying that.

Apparently Paul Heyman is being taken to the hospital in an ambulance, because when you Spear an overweight man in his fifites, bad stuff can happen.

This is obviously a storyline point, but still, maybe don't make Heyman take one of those again, cool?

And now, a spooky gif.

Kendrick comes out, does a "Nice Guys finish last" promo.

The match starts and TJP immediately goes on the attack, hitting his GTS-style Devastation Kick.

Kendrick goes fetal under the turnbuckle and they're separated as we go to COMMERCIAL.

Back from the break, TJP hits a dropkick, then a sit-out Wheelbarrow Facebuster.

Kendrick crotches Perkins, but TJP kicks him away.

He does his Hurricanrana over the ropes thing, where he pulls Kendrick out of the ring with him, and his neck lands on the apron as he falls.

THAT'S ...
THAT'S THE HARDEST PART OF THE RING!

But seriously, the slow-motion replay looks HORRIBLE.
TJP is lucky to be ALIVE.

He gets back in the ring first, and Kendrick doesn't. On purpose.

He gets counted out, but he retains the title.

After the match, TJP attacks Kendrick, putting him in the Kneebar for a while.

Strowman wants better competition, and since we didn't get a PPV match with him and Sami Zayn, we'll never get to see how he could do against a real wrestler.

He wants to be part of Team Raw.

Foley says that there's going to be a Battle Royal later tonight, and the winner will be part of Team Raw.

If Strowman doesn't win that, I quit.

YOU HEAR ME, SEAN ROSS SAPP?

He says that the ending left a bad taste in his mouth.

KO's music hits and he and Jericho come out.

KO and Jericho say that Mick is angry because KO won.

Foley is pissed because KO could have won on his own, but he cheated anyway.

He says that Steph wanted to suspend Jericho for interfering in the cell, but he convinced that anyone devious enough to "ruin the integrity of the cell" should be on Team Raw.

But he also says he needs someone he can trust and that someone, wait for it, I'm going to be so happy you guys, that someone,

Reigns comes down to the ring.

He says "You boys don't look happy to see me."

Jericho shakes his head no.

Roman says "Thanks for the vote of confidence" to Mick and is greeting by a pretty loud "Roman Sucks" chant.

There's a lot of terrible banter, even Jericho can't save this bullshit.

I'm not going to type it out, because Roman makes my head hurt.

Jericho challenges Roman to a US Title match tonight.

Battle Royal for a Spot on Team Raw

Everyone gangs up on Braun, Cesaro hitting uppercuts, Sami Zayn hitting a Helluva Kick, Sheamus hits a Brogue Kick and Braun topples through the middle ropes, so he's not eliminated.

Braun vs Sami for a while. There's a struggle at the ropes where it looks like Sami might get Braun over.

The New Day are Dressed as Kama from Nation of Domination, Papa Shango and The Godfather.

So they're all dressed as the same guy.

They're the Team Captains for Survivor Series Tag Match.

They talk about different tag teams.

Alexander should not be the one selling in these matches.
Let Swann or Dorado do it, give Alexander the hot tag.

In this case, it's Rich Swann who gets the hot tag, hits his double foot curb stomp, then his jumping Frankensteiner, then his rolling thunder Frog Splash.

The pinfall is broken up, and everything breaks down.

She talks about how she made history.

She says she's captain of the women's Survivor Series team, she knows that Nikki Bella is captiaining Team Smackdown, and she warns her that she has no problem ending Nikki's career if she gets in her way.

She invites Bayley out, since she's on Team Raw too.

Bayley is actually pretty respectful, but not enough for Charlotte.

Charlotte says Bayley has a match against their Survivor Series Teammate next.

Bayley thinks it's Dana Brooke, and she mocks Dana.

Charlotte says it's not Dana.

Cool to see them wrestling on the main roster.

Bayley keeps dodging Nia's charges until Nia catches her and hits a Shoulderbreaker.

She then throws her across the ring, smashes her in the turnbuckle.

Bayley tries to comeback, it's thwarted.

Nia Jax picks her up in a bearhug, it's reversed into Guillotine Choke, reversed into a Vertical Suplex, but Bayley lands on her feet.

Bayley mounts a comeback with a lot of dropkicks but Nia demolishes her with a shoulderblock.

She's about to drop the leg on Bayley from the second rope, when Bayley gets up for super Bayley to Belly position, Nia headbutts her and dumps her over the ropes to the floor.

Nia follows, smashes her into the barricade.

Back in the ring, hits a Samoan Drop.

Her unbeaten streak on the Main Roster continues.

This better be a quick match.

Cesaro ends up getting worked over for a while, taking way too much damage.

THIS MATCH IS ALREADY TWICE AS LONG AS IT HAD ANY RIGHT TO BE.

Sheamus gets the hot tag.

Epico gets put in the Cloverleaf.

Cesaro cuts off Primo trying to help with a huge uppercut.

Golden Truth visit a Haunted House because God hates me.

It's fun to think of Jericho having the US TItle alongside KO with the Twizzler Title.

It's fun for them to think it, too, apparently.

Back and forth action, Jericho hitting a flying cross body off the top rope for two, Roman no-selling it.

The action spills to the outside, Roman rolls Y2J back inside, as Jericho distracts the ref, Owens shoves Roman into the Ringpost.

Back from the break and Jericho is firmly in the driver's seat.

So here's what's going to happen from here on out.

Reigns is going to take a lot more damage, he'll power out of something, he'll Superman Punch Owens as he tries to get involved, he'll Spear Jericho, he'll win.

Owens and Jericho will try to beat him down after the match and Seth Rollins will come out to save him, they'll shake hands because they have the memories of goldfish.

Roman goes for the Superman Punch, Jericho ducks it, goes for the Walls of Jericho, Reigns powers out of it, like I said he would.

And then later HE DOES IT AGAIN.

He hits a sit-out powerbomb on Jericho, Two Count.

He punches Owens on the apron, then hits one on Jericho, and then Spears him.

Owens breaks up the pin.

The beatdown happens as I said it would.

And Rollins music hits, as I said it would.

He comes out, attacks Jeri-KO, goes for a Pedigree on Jericho, but Owens pulls Jericho out of the ring before he can land it.

Jeri-KO walks up the ramp, leaving Rollins and Reigns in the ring together.

They look at each other from across the ring, no handshake.

Okay, so I was wrong about one thing.