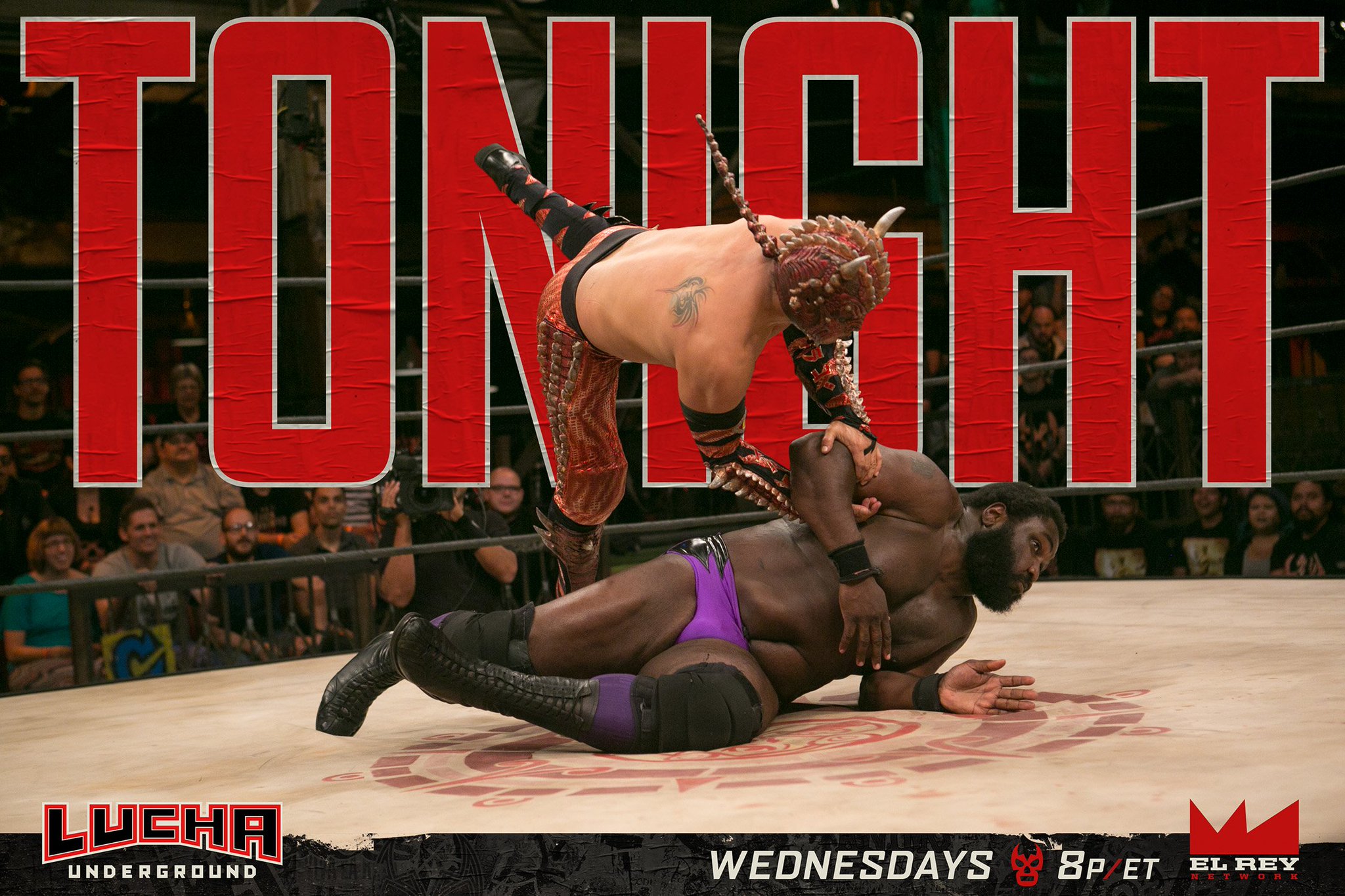 This week on Lucha Underground, we will see Drago, still under Kobra Moon's command, in action. We will also see Joey Ryan vs. Cortez Castro in a 5-0 Street Fight! Don't miss the action tonight at 8 EST on El Rey Network!

Tonight we will hear from Dario Cueto about the 100th episode next week.

Drago vs. The Mack for an Ancient Aztec Medallion

We start with a running dropkick by Drago then a DDT who has taken control, Mack goes for a roll up and then kick out. Lots of back and forth and then they both get to their feet. The Mack in turn flips off Drago. They stare off, then back and forth between the two and a flying kick by Mack brings Drago down. The Mack with a quick cover and kick out again by Drago. Drago with a flying kick, then a spinning DDT, roll up and it's Mack's turn to kick out. Mack with a big forearm to Drago in the corner, suplex by Mack, Drago is down. Mack brings him up, lifts him and now Kobra Moon is on the apron distracting Kobra, Drago lands a series of kicks, The Dragon's Lair and takes the win with the help of Kobra Moon ringside. The Mack is not happy about this and gives Drago a stunner, tries to give Kobra Moon one and now Pindar and Vibora come in to her rescue and start beating up Mack. Vibora gives him a massive chokeslam and Mack is down while the four stand over him in victory.

Winner: Drago via pinfall with The Dragon's Lair

Dario Cueto says that next week is the 100th episode of Lucha Underground and we will have El Dragon Azteca, Jr. vs. Pentagon Dark, then an Atomicos Match with Johnny Mundo, Taya, Ricky Mandel and P.J. Black and has instructed Prince Puma, the opponent, to pick his own team for the match. The other competitors will be announced later tonight and the match will be for one Ancient Aztec Medallion. The main event with be Matanza vs. Rey Mysterio. Dario says he wants to talk to Rey directly before next week. Rey makes his way to the ring. Dario says tonight, he is giving Matanza a taste of blood. Tonight Matanza will face the whole Rabbit Tribe and is sending Rey home so that he doesn't interfere in the match. Rey says he isn't going anywhere. Dario says if he does not go home, he will call off his match next week and will FIRE El Dragon Azteca. Rey says he can wait until next week, he will leave, but he will end the Cueto family legacy. He says after he is done with Matanza, he is coming after Dario himself.

Joey Ryan vs. Cortez Castro in a 5-0 Street Fight (for a Medallion!)

There are police officers in SWAT gear outside the ring in preparation for the match and a police car standing by. Ryan runs from Castro and Ryan starts off by getting in some kicks. Now chops by Castro. Ryan runs from Castro again, he tries to leave but the officers with their barricades keep in in the vicinity. DDT by Castro on the floor. Castro pulls out a nightstick club from under the ring and throws it inside. The men move inside the ring, Ryan back outside and grabs one of the riot shields from the officers. He places it in the corner of the ring. Ryan back outside the ring and grabs handcuffs from under the ring. He hits Castro in the top of the head with the handcuffs busting Castro's head open. Ryan now grabs the stick and hits him in the back with it. Suplex by Ryan. Ryan pulls out a rubber glove. The crowd chants "cavity search". Ryan grabs Cortez by the backside. Castro is pissed and gets Joey down and is coming in strong. He now has control of the match. They move to outside the ring. Ryan is trying to escape again and the officers close in on him forming a semi-circle around the ring. Ryan tosses Cortez into one of the officers. Then into another one with his riot shield up. Ryan throws more riot shields into the ring. Castro looking for something under the ring. Castro throws Ryan's head into the hood of the cop car by the ring. Castro grabs a baseball bat from under the ring. He swings but hits the car. Ryan now finds a sledgehammer from under the ring. He swings and hits the car as well, destroying the windshield of the car. Castro goes for a move and gets caught with a low blow. Ryan slams Cortez down on the hood of the car and then moves Castro back in the ring for a cover. Castro kicks out. Ryan sets up the riot shields in a pile. Cortez runs into Ryan with one of the shields. Ryan goes and grabs a coffee cannister and tries to hit Cortez with it and misses. Cortez grabs the coffee and pours it down Ryan's pants! Now Cortez has found a taser. Cortez tasers Ryan in the thigh! Ryan comes back with a superkick through a box of donuts! They move to the announce table. They are on top of the desk. Superplex by Castro off the top of the desk onto the ground! Ryan grabs a nightstick from under the ring. They move inside the ring and Ryan runs into MACE! Castro with a running slam into the riot shields! Cover and pin! Cortez Castro wins the match!

The Rabbit Tribe vs. Matanza

The tribe offers Matanza a top hat. London throws the hat in the corner. They try to hold hands with Matanza and he throws two into each other and then kicks London. London gets Matanza over the top rope, Saltador flies out at Matanza who catches him, then Suerte comes out of the ring at Matanza knocking him down. They get Matanza back in the ring and circle him. The three punch him, the Matanza takes turns punching each of the members. He runs at the corner towards the members. They work together to land a double stomp, Suerte does a running dropkick and then a series of dropkicks by the Tribe. Superkick by London. The Tribe dance in a circle, London jumps at Matanza who catches him, throws him at Suerte and Saltador and then dropkicks the three. Matanza works on London while Saltador and Suerte hit himwith confetti. Shooting Star press by London, cover and kick out by Matanza. London to top rope again. Suerte and Saltador try to hold him down but it doesn't work. Matanza to secondr rope with London. Vertical suplex by Matanza to London. Saltador gets caught in Wrath of the Gods by Matanza, cover and win.

Prince Puma is in the ring to announce his team members. Mundo comes out. Mundo says he is going to take him to Slamtown at Ultima Lucha Tres. Puma says he's taken him to Slamtown before and know that he can beat Mundo. Mundo says he is putting his title on the line and asks Puma to put his mask on the line. Puma says "Let's do it!". Dario comes out and says to Johnny that he loves the idea, however, there is already a mask on the line match at Ultima. He says they need to have a different type of match. Cueto suggests his career. Vampiro stands up and motions at Puma to not do it. Puma takes down Mundo, picks up the title, and then says to Cueto he is confident he can beat him. He takes the stipulation.

Next week we celebrate 100 episodes of Lucha Underground!