RAW Results 4/24 Braun vs. Kalisto in a Dumpster Match!

Coverage and Discussion for

Join us for live coverage, and comment on our boards below, or our forums by registering

for FREE at fightful.com! 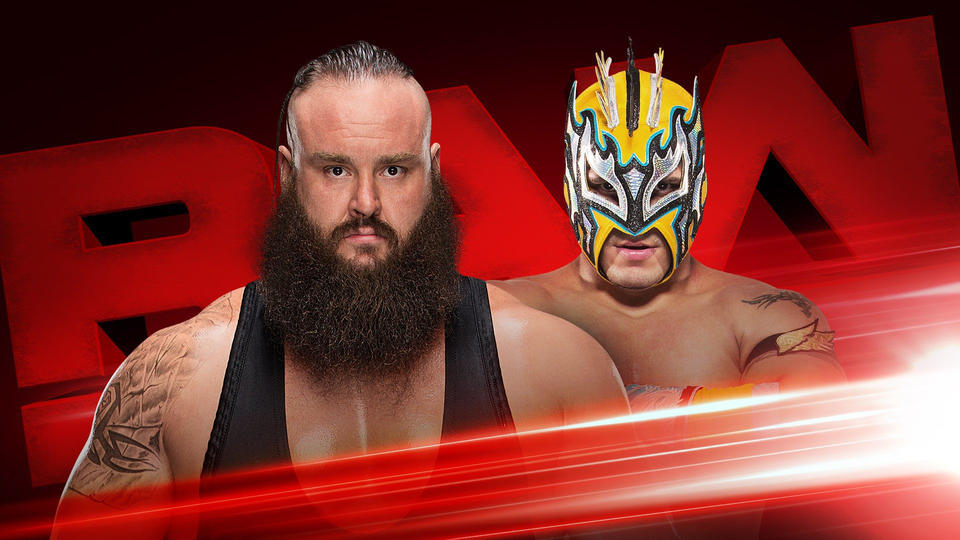 Last week we saw Braun Strowman's rampage through backstage, taking out R-Truth, Golddust, and Kalisto and then inside the ring against The Big Show. The two giants went to war but it was Braun standing tall after literally breaking the ring. Kalisto has been brave enough to call out Braun and ask for a dumpster match. The match will take place tonight during Raw and I have to say, I don't think it will go Kalisto's way. Regardless, I am excited to see more! Let's see what happens tonight in the lead up for this Sunday night's Payback pay-per-view.

We start with a video package reviewing the wrath of Braun over the past few weeks.

Chris Jericho starts us off tonight, heading down to the ring with The List in hand.

We start with the highlight reel. Jericho says its the last Highlight Reel for Raw because he is winning that United States belt back on Sunday and is going to Smackdown. He says he needed a huge guest for tonight, a "sexy beast" and his guest is, himself! Jericho calls KO not the face of America, but maybe the hemorrhoid of America. The Miz interrupts. Miz and Maryse come into the ring. Miz says Monday Night Raw is about the "it" couple. Jericho says "you better watch...it!" The Miz says that the Highlight Reel has been canceled and is being replaced with Miz TV. The Miz calls for a set change and actually gets it. The director's chairs come in. Then Dean Ambrose comes out. Dean calls the Miz a "stupid idiot". Jericho smiles after the chants start in the crowd. Ambrose calls for another set change, it's time for Ambrose Asylum. Dean says that he is rooting for Jericho this weekend, even though they feuded in the past. Ambrose gives Jericho a light up jacket. It is a truly terrible looking jacket. Jericho sports it anyways. Miz says that Ambrose is devaluing the Intercontinental Championship. The viewers should be thankful Miz is at Raw. Dean delivers Dirty Deeds to Miz and walks to the back. Jericho puts Maryse on the List since she is married to the Miz.

Next up, Matt Hardy vs. Sheamus in a singles match.

Matt goes for an immediate roll up, Sheamus gets out and they go back and forth until Sheamus gets Matt off his feet. Matt gets up, counters hip toss and neckbreaker by Matt. Then followed by three leg drops, cover and kick out by Sheamus. Sheamus gets up and delivers kick to the face. Sheamus gets out on the apron and Matt delivers consecutive elbows. The two fight on the apron and Matt delivers a Side Effect to Sheamus and the two go down to the ground. Commercial break. We return with Sheamus in control having Matt in a headlock. They move to the ropes and Sheamus hammers on Matt's chest. They move back inside, Sheamus goes for the cover over Matt and kickout at 2. Sheamus lifts Matt up looking for White Noise, Matt gets out and goes to the turnbuckle. Matt gets a DDT on Sheamus after Sheamus runs into the turnbuckle. He can't make the cover. The two get back up and Matt delivers blows. Running bulldog. Elbow drop off second rope, cover on Sheamus, kickout at 2. Matt is back on his feet, looking to finish Sheamus. Then a huge knee to the face of Matt by Sheamus. He rolls out of the ring. Sheamus runs off the apron and Matt catches him with a kick. Sheamus gets Matt down, Jeff goes to check on Matt and Sheamus pushes him away. Jeff tries to see what that was all about and distracts Sheamus, Cesaro gets in Jeff's face. While Sheamus is distracted, Matt gets the Twist of Fate, cover and win!

Winner: Matt Hardy pinfall over Sheamus via Twist of Fate

The four are in the ring who had a mutual respect last week but now don't look so sure. The teams still shake hands but will face each other this Sunday at Payback.

GM Kurt Angle is on the phone and says that he will make sure Kalisto wants to follow through with the match against Strowman tonight. Miz is behind Angle and says that Jericho and Ambrose shouldn't get away with their actions. Angle tells Miz to find a partner for a tag team match to get this scheduled because he will be having a match against Jericho and Ambrose tonight.

Exclusives
Alex Gracia Says Hana Kimura Comforted Gaijin In Stardom, Made Things Easier For Everyone
Nidia Remembers "Marking Out" Over Meeting Mick Foley, Says Vince McMahon Was Intimidating
Nidia Remembers Her Time On Tough Enough, Creative Editing From MTV
Bret Hart Says He Was Supposed To Play A Viking In The Simpsons, Not Himself
We Asked Kenny Omega To Say Nice Things About AEW Wrestlers, Here's What He Said