Featuring a discussion of last week's events
and a preview of tonight's episode.

... But This Is Getting Ridiculous.

First, let me say that the ladder match was really well put together last week, and objectively entertaining.

However, I couldn't get this nagging problem out of my head:

He might be the best wrestler in the world.

And as such, call me crazy, but I believe he deserves to be taken seriously.

And he can't be, and he won't be, if he continues to work with the comedy duo of Ambrose & Ellsworth.

This has nothing to do with me disliking James Ellsworth. I think he's doing a great job.

I just want to see him somewhere other than the Main Event scene, dragging AJ Styles down into the muck and the mire of having to prove himself over and over again against a guy who's built like David Spade.

And Ellsworth, as great as he is at doing what he does, is contributing to the delinquency of Dean Ambrose, who is in full "Wack-A-Doo Dean" mode.

What happened to the old Dean Ambrose? The guy who actually fought like he was unhinged? The guy whose unpredictability was only matched by his viciousness?

This is the Dean Ambrose that I want to see: 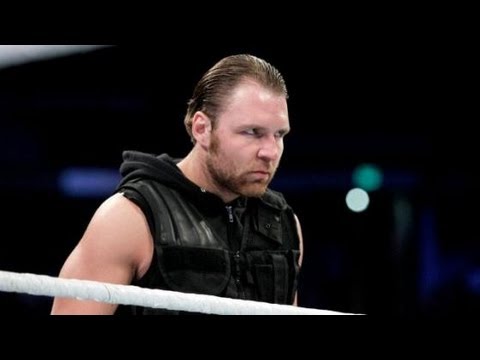 Rocking the sleeveless hoodie under the SWAT vest.
Ruining fools without regard for life and limb.
I want THAT guy back.

Instead, what do we get?

We get THIS guy.

And that guy's funny (some of the time), but he's not the guy I want.

He's definitely not the guy I want challenging AJ Styles for the World Title.

And somehow, it's James Ellsworth's fault.

Not deliberately, of course. But by proximity. Ellsworth is a carrier for comedy, and it's contagious. Different people present different symptoms, and with Dean, he goes full "Wack-A-Doo," and it's the worst possible version of Dean Ambrose available.

Still, it's astonishing how over this whole angle is, and how "over it" I am.

But that's me. Out of touch with mainstream wrestling fans since 1997.

And now for a preview of Tonight's Smackdown:

As always, these topics are taken directly from the official preview on WWE.com: 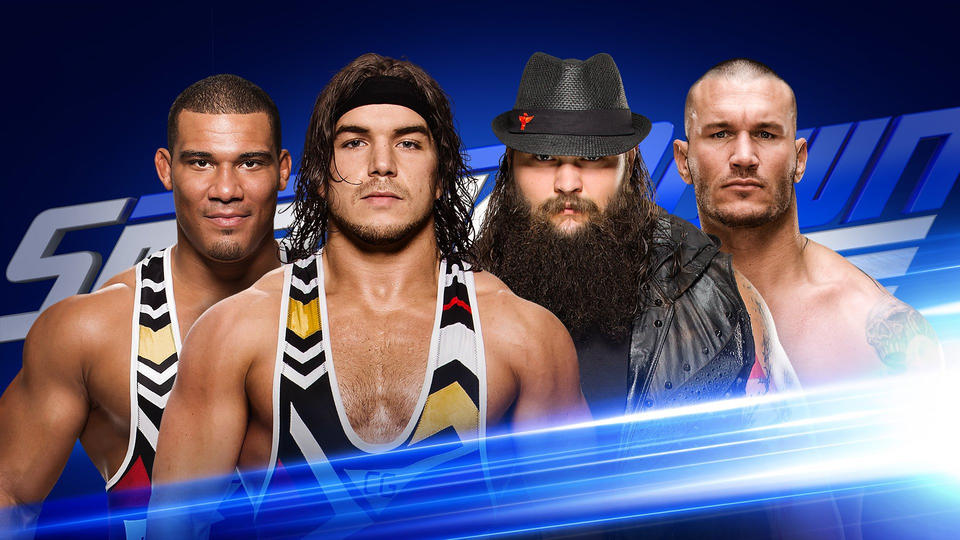 Well, it's kind of obvious, isn't it? They're not going to throw A.Alpha into a face vs face match vs Heath Slater & Rhyno, the most over act on the card not named Ellsworth. They couldn't possibly get over, no matter how many Steiner Bulldogs they pull out of their butts.

So Wyatt & Orton win tonight, and probably win at TLC on Sunday too, which hopefully sets up a nice long feud between Gable & Jordan and the Braysian Dawn Movement.

Here's a question that was posed to me last week: Considering that Bray and Randy were the Sole Survivors of that huge match on November 20, don't they deserve something more, something better than a gentle push towards the tag titles?

But there's really nowhere else to go, if you think about it. AJ Styles is still stuck in his own personal Groundhog Day starring Wack-A-Doo Dean as Ned Ryerson.

Intercontinental Champ The Miz is locked in a forever feud with Dolph Ziggler, it would seem, and even if he wasn't, there's no way you pull him out of this spiral of brilliance he's giving us every week.

So the next logical place to go is the Tag Division, and Bray and Randy could RULE that sumbitch on Smackdown for as long as they choose.

Especially if you allow them to utilize the New Day/Freebirds rule and throw Luke Harper into the mix. Hell, that way Bray or Randy (or Luke, for that matter) could go off and do the singles thing for a while, maybe pick up the IC Title once it's been taken off Miz for good. How cool would it be if the Wyatts Trio was co-Tag Champs and Harper was carrying around the IC Strap in his teeth or something?

Everyone assumes that Randy's going to turn on Bray any day now, prove he was never actually brainwashed (bray-nwashed) and they'll go right back into that feud, and yeah, that's probably what they're going to do, but if they don't, why not slow burn this for a while, put the Tag Titles on the New Wyatts and give American Alpha something to chase?

(Also, in this scenario Rhyno has turned on Heath Slater and they can feud in the undercard for a while. I'd watch the hell out of that.) 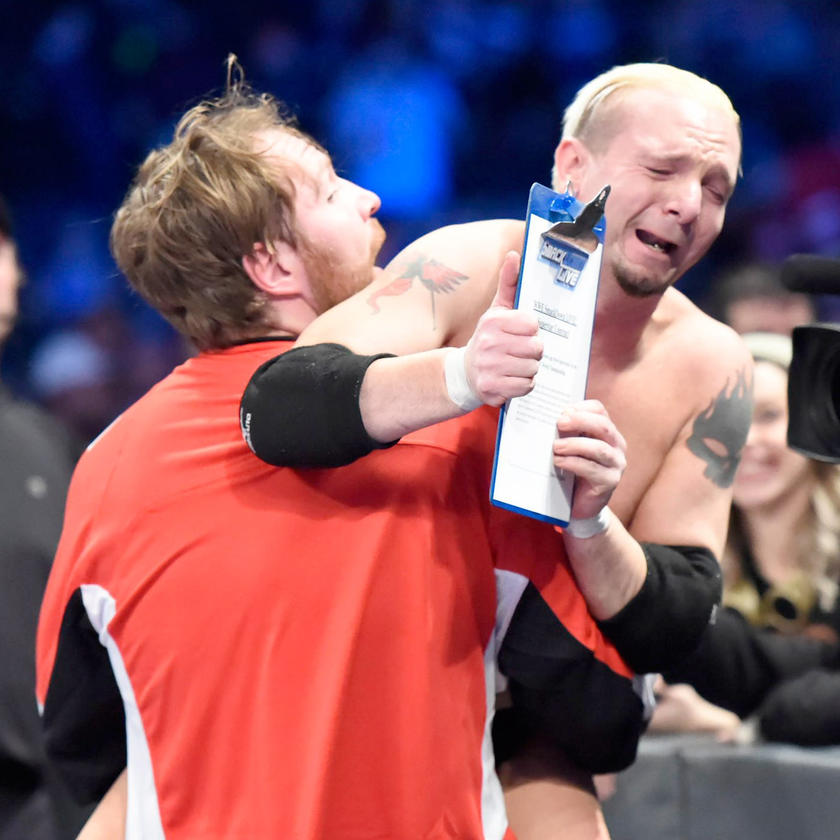 This seems like a question that someone is asking in Creative meetings right this very second.

Are they going to actually give him a title reign? Put him in a multi-man match where he gets lucky and wins the Intercontinental Title off the Miz at Fastlane or something? Then gets creamed by Bray Wyatt or Baron Corbin or something and we start this whole underdog dance again?

How long can this last?

We're going to find out, because WWE is going to run this thing INTO THE GROUND, starting tonight when Ellsworth is the guest on the Ambrose Asylum. 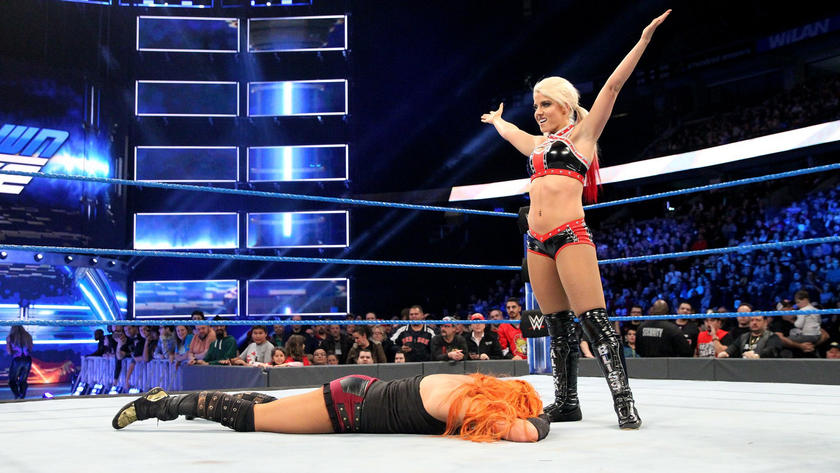 I just hope they make their match at TLC into a Ladder Match, a TLC match, something. After that Falls Count Anywhere masterpiece that Sasha and Charlotte turned in last night, you've got to think Alexa and Becky are politicking for something big right now. 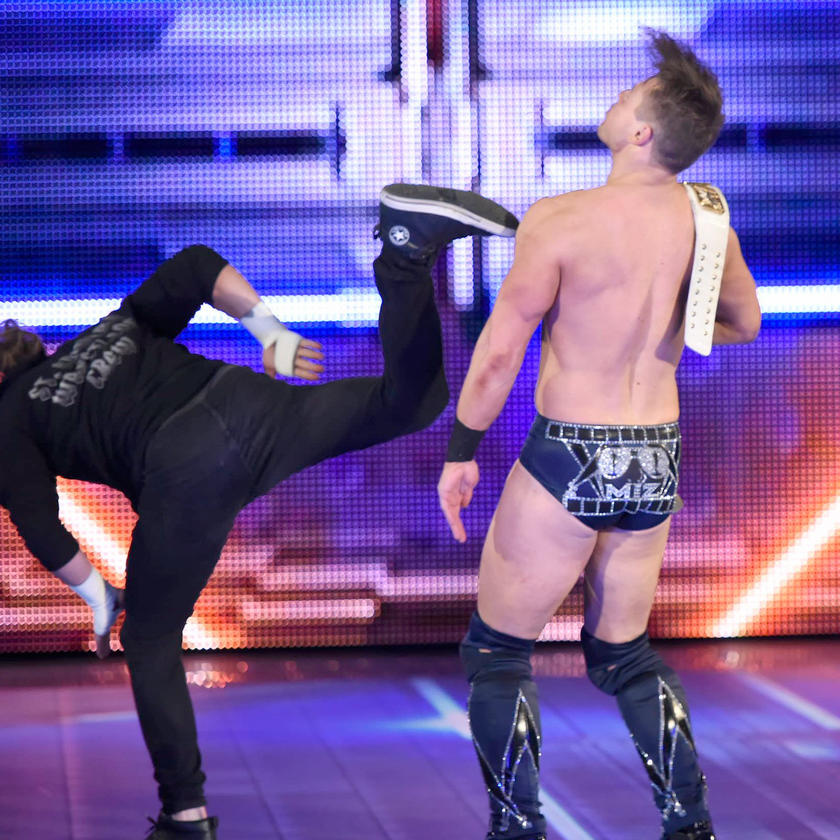 This appears to be a topic surrounding which IC Title Match competitor, Dolph or Miz, is going to attack the other one tonight to try to injure him before Sunday.

By the way, this match at TLC could very well steal the show. 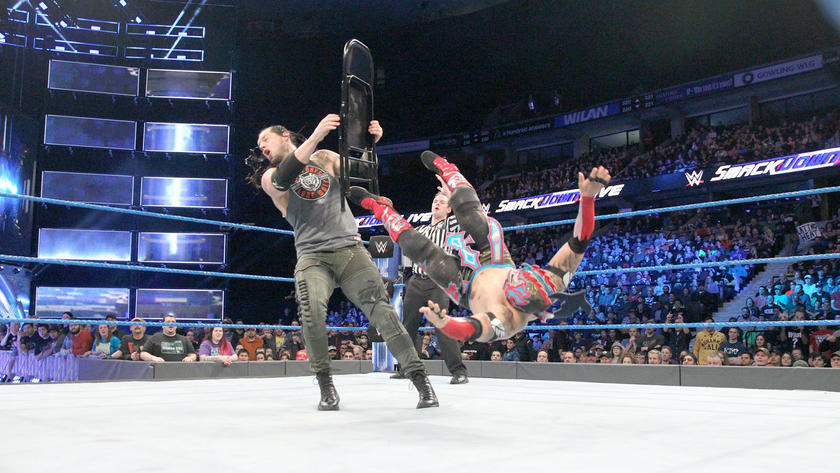 It's "Which Guy's Going To Attack The Other Guy Before The PPV?", Part 2.

I like that Kalisto's shown some fire the past few weeks; it gives him more of a character. It also means I'm not going to be shocked if he attacks Corbin backstage tonight.

And look, Corbin has already proven that he don't give a F*CK, so interrupting some Kalisto match and hitting him with a chair as "preparation" is kind of par for the course.

Hell, if he were to go after Kalisto in catering with a meat cleaver, I wouldn't be surprised at this point.

Actually they should do that tonight.

Let's see Kalisto "Good Good Lucha Thing" his way out of that.

Until Next Time, I've Been Alex Pawlowski
and this is what I hope
AJ Styles does to Dean Ambrose tonight.