SmackDown React-Down 9/13: The Heel That Runs This Deal

Welcome to the Weekly SmackDown React-Down

Look, I'm gonna level with you guys.
I have a couple part-time jobs and one of them is screwing up my whole schedule.
I can't write the Raw Reaction on Tuesdays, which means I have to write it on Wednesdays.
Which means I have to write the SmackDown React-Down late Wednesday Night.
Then I go to work on Thursday morning.
It sucks, and I'm trying to get my schedule changed.
But at this point, everything's going to be a day late for a while.
I apologize, but it is what it is.
I just thought you should know.
Thanks for understanding.

Previously on the React-Down: The boring go-home show for Backlash tricked me into thinking that Smackdown had gone soft.

BOY, was I wrong.

So AJ wants to be known as the Face That Runs This Place, but he's not a face at all.

So I have christened him: The Heel That Runs This Deal.

It's a hell of a lot better than "The Champ That Runs The Camp."

And then John Cena comes out, and the Philly crowd actually sounds glad to see him. Good for you Philly crowd.

Cena says AJ Styles, you got something that belongs to me.

AJ says, whoops, sorry, you can have it back:

That is just next-level dick-holery.
I love it.

But no, John Cena wasn't talking about the armband.

He was talking about the WWE World Championship. Seems Cena's finally decided it's time for him to break Ric Flair's 16-Time World Champion record.

Then Dean Ambrose's music hits, he lays into AJ verbally for a bit, before John Cena bodies Ambrose, turns him around, and ETHERS him.

"You hung this dude by his crotch and now you're complaining you lost to a low blow?"

"Stone Cold was right when he called you out on his podcast."

"I'm surprised that low blow even hurt you, cuz you ain't stepped up, you fell off."

"All you been showing the WWE Universe is that you got no balls, BRAH."

Dean, to his credit, gave as good as he got.

"You must be confusing me with someone who gives a damn what you think."

"I have no patience whatsoever for you and your rah rah speeches
and your sanctimonious bull crap."

"You know what you are to me, John? You're a lazy part-timer."

"You probably should keep doing your TV shows, and award shows and movies
cuz you can't keep up anymore."

"WWE uses you as a corporate puppet cuz you're great on morning shows
and you look good on a cereal box,
but they know and you know and I know,
you can't get it done in the ring anymore."

If this wasn't a shoot, it was damn close. Best in-ring promos being traded that I can remember.

And AJ, the Heel that Runs this Deal, he had the best seat in the house.

THAT IS SUCH GOOD HEELING, YOU GUYS.

By the way, I know I get on Dean for being an inconsistent character and for having the moveset of a first grader playing pretend, but he was excellent here. Always terrific on the mic, this was a step up even for him.

More of this Dean, please. I would appreciate it.

And no more Wacky Clotheslines, okay?

Anyway, Shane-o Mac comes out, makes a triple threat match for No Mercy and also, for later tonight, a Tag Team match, playa.

Cena and Ambrose vs Styles and a partner of his choosing. If he can find one ...

The Miz is the Shizz.

How Dolph Ziggler gets another title shot at this point is beyond me, but whatever.

Doesn't matter. The Miz is doing some of the best character work of his career, and I'll watch him do anything at this point, even wrestle Ziggler for the one millionth time.

Not so fast though, everyone. The Miz demands a contract re-negotiation before he'll agree to any future title defenses. Miz wants to be paid like the main event talent that he is, and I think Daniel Bryan might be stubborn enough to drag this out for weeks.

Looking forward to it.

More of this, please.
More of the Miz.
In every way possible.

Any man with two hands.

You may remember James Ellsworth as the inaugural Braun Strowman jobber sacrifice.

Well, apparently he survived that, and they brought him back.

So he could get murdered by The Miz. 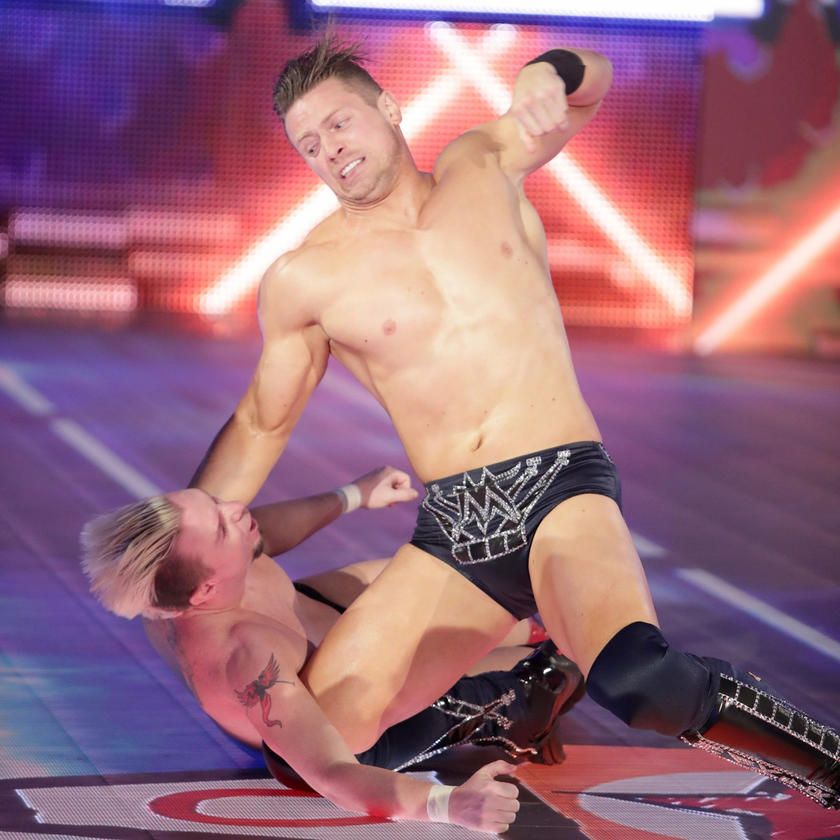 Yes, the Miz, who keeps reminding Daniel Bryan via shouting into a camera lens that "I AM THE MAIN EVENT!!!" attacks poor James Ellsworth on his way to the ring, and gives him a Skull Crushing Finale on the ramp.

AJ, for his part, looks very happy to have the Miz as a partner. Not sure why he didn't just ask the Miz earlier in the night as Baron Corbin and Kane were turning him down, but that's cool. I think he's just happy to have someone around who'll take the AA and eat the pin.

And The Miz, because he might be on a hot streak, but let's not get crazy here, does just that.

Afterwards, depending on who you talk to on the internet, Dean Ambrose either went full heel, or kept expanding his horizons into the darker side of the "tweener" category.

He suckered John Cena into a Dirty Deeds.

The Philly crowd took this to be a full-on heel turn. Not sure if I agree with them, but we'll have to see what happens.

Holy crap, they're really gonna have Rhyno turn on Heath, aren't they?

That's the face of a guy who realizes that Heath Slater's finishing move is Rhyno.

Every match they've had together has been won by a Rhyno Gore. Maybe Rhyno feels like Heath's not pulling his weight. I'll tell you what, turning heel on Heath Slater would immediately get more heat on Rhyno than he's ever had before.

They're definitely going to do it eventually, but I hope not too soon.

On another Note: Shane McMahon praises Slater for never giving up, not taking no for an answer, blah blah blah, SCREW YOU SHANE. You rescinded this man's contract offer a few weeks ago because he was concussed, thought you were your sister, and said you were beautiful. You are not a nice person.

The funniest thing of the night? The Ascension's new face paint: 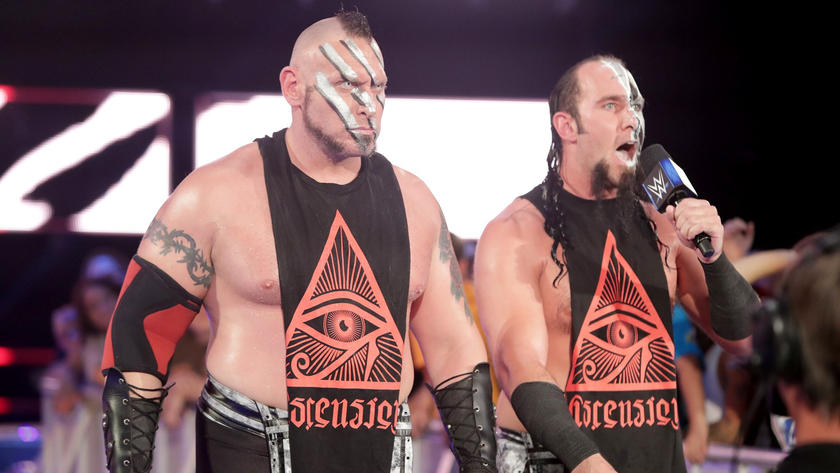 The funniest thing is that the Ascension somehow got a title match.

It didn't go too well for them.

I plan on enjoying the SlaterRhyno reign for as long as it lasts.

It'll be hard to enjoy if they have to face The Ascension more frequently than never.

Becky is a wonderful person, and she really does deserve this title.

I am happy for her.

But somehow, I'm even more happy for Alexa Bliss.

As she proved on Talking Smack, she's a damn firecracker on the mic, and this three week build to her vs Becky is going to be simply Bliss-tacular.

Also, I think we're low-key getting a second women's feud on the No Mercy PPV, and that is pretty awesome.

Nikki vs Carmella's got a lot of potential, too. Very cool that they're giving both the new recruits something to show off their talents right away.

Doing nobody any favors.

That's what this feud is.

We know Randy is going to win, if he's ever deemed healthy enough to do anything but give someone an RKO.

We know Bray is going to lose, because that's what he's always booked to do.

The feud has no heat. Neither guy is getting over. It's meaningless.

Even poor Erick Rowan is stuck in some weird purgatory, where Bray Wyatt walking out on him before Summerslam means absolutely nothing, either.

I HATE THIS SO MUCH.

For God's sake, just book Bray to be the chaos-generating Swamp Joker that we all want him to be.

This is the worst thing about Smackdown.

White after Labor Day? They really are heels.

It looks incredibly devastating. I think if he really hit that hard, though, he would have made an NFL roster.

So if you didn't see it, Apollo Crews and Baron Corbin had a knock-down, drag-out, one-of-us-is-leaving-in-a-body-bag kind of match on the Backlash Pre-Show.

It was truly great. Corbin won.

So on Tuesday, they were supposed to have a re-match. Corbin attacked Crews before the bell, then hit the End of Days on the floor.

So, cool, I thought. This is building to a rematch at No Mercy, Apollo will get his win back and maybe they'll start to develop a character with him.

Jack Swagger comes out, wearing street clothes, stares down Corbin until the Lone Wolf leaves, then delivers a terrible promo about how you can call him Jumpin' Jack Flash because SmackDown is his new home.

That doesn't make any sense.

A little context, even though the context won't help it make any more sense:

Jinder Mahal came out on Raw Monday night, and he proclaimed that after he was filled with hate when he was released, he found his inner peace in the Himalayas. He tells part of the story in his native tongue.

Well that was just about enough foreign-sounding stuff for Jack Swagger, who apparently has a Bat-Signal that tells him where someone is doing something "un-American."

Now he has to challenge Jinder Mahal to a match now, I guess, You may not know this, but this is like the 6th match between the two since Jinder's been back.

All of the others have taken place on Superstars or Main Event.

Whew. What a barn-burner that was.
2 and a half minutes of scintillating action.

Jack has won all of the matches between the two, until this one on Raw.

Jinder beats him with a damn Regal Cutter, clean as a whistling sheet, in the middle of the ring.

After the match, Tom Phillips approaches him and says "It's no secret that your Raw contract is expring soon."

Now it may not have been a secret, but I sure as hell didn't know about it.

Jack's response is to just look at Tom Phillips all squinty eyed and short of breath, then walk away.

It is immediately the most interesting that Jack Swagger has been in years.

By the way, flash forward to Tuesday, and Phil Philbin was not messing around. Apparently "expires soon" meant "when the big hand meets the 12," which is probably the best way to help Jack Swagger tell time.

So he shows up on Smackdown, and I guess he's getting into it with Baron Corbin? What does this mean for Apollo Crews? 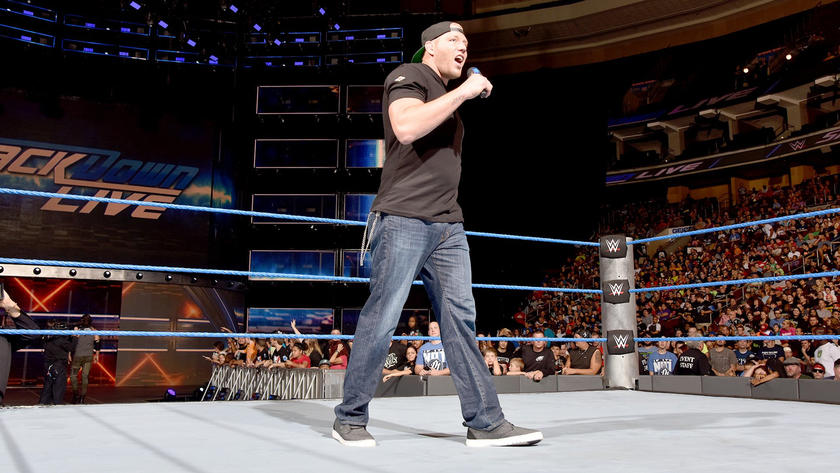 The SmackDown main event scene is strong, with The Heel that Runs this Deal locked in mortal combat with a fired up John Cena and the best possible version of Dean Ambrose.

The mid-card is in good hands, anchored by The Miz, which is a thing I never thought I'd type.

The Women continue to show off great talents in the ring.

Heath and Rhyno as champs (for as long as that lasts) are a good measuring stick for the rest of the tag division.

But the undercard looks bleak as hell. If Jumpin' Jack Flash is your best hope, you need to re-think your strategy.

Until Next Time, I've Been Alex Pawlowski,
and this was me when Jack Swagger came out on Raw

and this was me when he came out on Smackdown.