Superstars Round-Up 8/5: Neville Battles Mr. Irrelevant (and his own Irrelevance)

Welcome to the weekly Superstars Round-Up where I watch Superstars so you won't have to.

Also This Week on Main Event:

This Week on Superstars:

Neville was the NXT Champion for 287 days. Followed by Sami Zayn, then Kevin Owens, then Finn Balor.

Look at the guys who followed him in the lineage of NXT champions.  Kevin Owens is a former 2-time Intercontinental Champion, putting on MOTY candidates with Sami Zayn.

Finn Balor held the title for 292 days, besting Neville record for longest reign by five days. He was the 5th pick in the recent WWE Draft, and on his first night on the main roster, he beat Owens, Cesaro and Rusev in one of the best Fatal 4 Ways that I've ever seen, then was booked to go over Roman Reigns, a 3 time WWE Champion who until recently was the undisputed top guy in the entire company. Finn Balor is going to break out The Demon for the first time in what might be the Main Event of the 2nd Biggest Show of The Year, fighting Seth Rollins to be come the first ever WWE Universal Champion. He is being positioned as the next big thing in the WWE. Don't be surprised if they have him go over Rollins just for the "New Era" cred. Finn Balor might very well be the WWE Universal Champion less than a month after his debut.

Meanwhile, almost a year and a half into his main roster career, Neville is wrestling a guy working a Mr. Irrelevant gimmick. On Superstars.

Where was Neville's push?  Where were his US and Intercontinental Title shots?  Kalisto got to be US Champ?  KALISTO? Neville lost in the final round of the meaningless King of the Ring tournament. That was as close to "gold" as he ever got—if you can call that hokey crown and scepter "gold."

I know, I know. Neville broke his leg in two places, two weeks before Wrestlemania, and he probably would have been in that giant IC Title ladder match. Probably wasn't going to win it, though.  And he was fully healthy for a full year before he got hurt.  You could have done something—anything—with him, at any point, during that time. But you didn't. And now he's right back to where he started.

And I don't just use that as a turn of phrase.  Neville made his debut the Raw after Wrestlemania 31. Guess who he faced.

This is Neville's second match back from injury. Both of them have also been against Curtis Axel. Mr. Irrelevant. In a way, Neville is not just battling Mr. Irrelevant. He's battling his own Irrelevance.

You can also kick him a lot. He won't even get out of the way.

You can also do your super-awesome, excessively flippy special finisher to Mr. Irrelevant, and then pin him fairly easily. 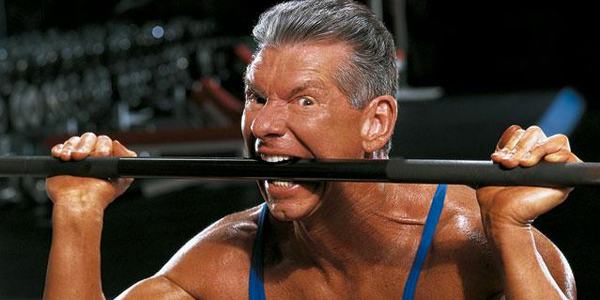 And that man might be clinically insane. He changes his mind as the breeze shifts. Today he might believe that Neville is a future Cruiserweight Champion, nothing more. Tomorrow, he could push The Man That Gravity Forgot all the way to the moon.

Catering to the whims of a mercurial 70 year old man who holds your career in the palm of his hand. It's enough to turn your life upside down.

The announce team said this would be a permanent thing.

The announce team, again, said this would be a permanent thing.

This week on Superstars, Swagger, serial fondler of his own bosom in public—

--has a new tag partner.  Sin Cara. At least this week the commentary team knows what's up. They make no mention of this being a permanent team. They know Swagger can't stay true to a tag partner for more than a few days.  Commitment-phobic much?

Oh my god, you guys, I just figured it out. When Jack Swagger does his "We the people" shtick, he's not pledging allegiance, he shielding his broken heart...

If only someone could teach him how to love again ...

Will that someone be Sin Cara?

Spoiler alert: Probably not.  Also, someone should tell Sin Cara he's wearing New Orleans Saints colors in Atlanta. People have been shot for less in the South.

Swagger and One Fight Stand du jour Sin Cara are facing the Dudleyz, who are about as monogamous as you can get.  Oh they may have broken up for a while, once or twice, but they always find their way back to each other.

The Dudleyz work over Swagger for most of the match, taunting him by putting their hands over their hearts and shouting "WE! THE DUDLEYZ!"

But Swagger eventually makes the hot tag to Sin Cara and the good guys win, like always, right?

The Dudleyz won? THE DUDLEYZ WON!

Look how happy they are, ya'll.

They haven't won a match since the day after Memorial Day. They should be happy.

And no, before you ask, I am not counting their participation as part of the USA Team in that Fourth of July 16 Man Tag Match as a win. That match was a loss for all mankind. We all lost a little something that day.

Please do something with Neville other that have him beat Curtis Axel in less than five minutes. Pretty Please. With sugar on top.

Happy to see the Dudley Boyz get a win; they deserve it. However, please let this be the last time Swagger and a mystery partner face the Dudleyz. Ever.

Until next time, I've been Alex Pawlowski
and this is me watching another
Dudleyz vs Swagger and _______ match.