WWE has placed "Saudi Arabia" back on WWE.com

In wake of the news that Washington Post columnist Jamal Khashoggi was killed at the Saudi Arabia consulate in Istanbul and the killing reportedly being set up by the Saudi government, World Wrestling Entertainment has been on the radar of high-positioned individuals in the United States such as Senators and other government workers who shared their opinions on if WWE should go along with running 'Crown Jewel' in Saudi Arabia or not.

Steve Austin Book To Be Released On 3/16

With all of the backlash that the sports-entertainment company was facing from the wrestling and mainstream media along with the negative attention attached to Saudi Arabia, they removed the location and information of where 'Crown Jewel' is going to be held from their website. There were many swinging reports over the past few weeks concerning whether WWE was going to cancel Crown Jewel or not but that was addressed during the company's third quarter financials conference call earlier this week. WWE confirmed that 'Crown Jewel' will be running as scheduled in Riyadh, Saudi Arabia and since that official announcement, WWE has placed 'King Saud University Stadium' and 'Riyadh, Saudi Arabia' back on the 'Crown Jewel' events page that they have set up on WWE.com. 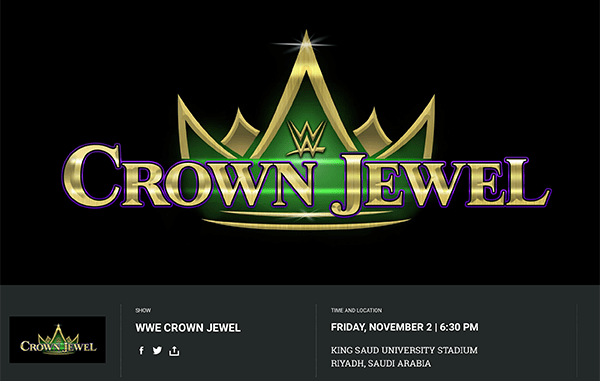 Current RAW Women's Champion Ronda Rousey shared her thoughts about WWE making the trip to Saudi Arabia just a few days after WWE's first-ever all-women's PPV 'Evolution'. To read what Ronda had to say about the situation and how she feels about it, click here.