WWE TLC Preview & Predictions: Like It's Going Out Of Styles

Here is your Refresher Column for

There's a lot of wrestling out there.

It's hard for most of us to keep up with it all, to keep track of who's feuding with whom and why.

So from here on out, my PPV previews are going to delve into the matchups and try to find a thread of continuity to explain why these matches are even taking place.

Think of it as a refresher course. I hope it's a help to some of you. 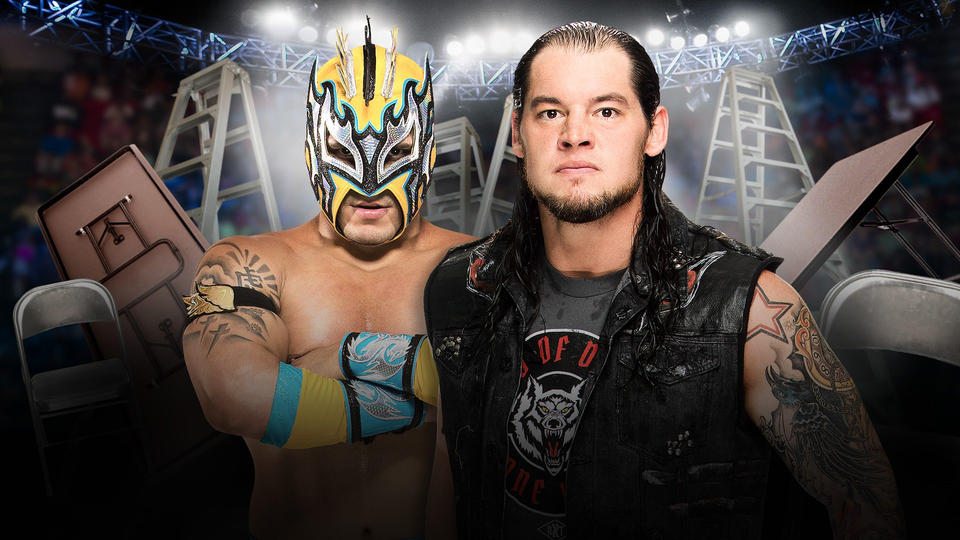 Baron Corbin, who is making a face in that pic that looks like someone farted and he's SUPER pissed about it, has had a problem with Kalisto for like, ever. This feud has been going on so long, it has grandkids. So let's refresh ourselves, shall we? Why are these guys even fighting anyway?

How did we get here?:

It all started on the pre-draft episode of Raw on July 18, when Corbin beat down Sin Cara after their match, and Kalisto "made the save." After the draft, Kalisto cost him the #1 Contendership for the Intercontinental Title. Kalisto didn’t even win that match. Apollo Crews did. (Ha ha. Apollo Crews.) With Crews locked in a three week long program vs The Miz, Corbin focused all of the rage he has about his receding hairline and beat the piss out of Kalisto for two consecutive weeks:

I guess he got too rough with Kalisto, because the poor little guy was too injured to compete at Summerslam as was originally intended. Corbin was pissed about that too.

Unhappy with the cancellation of his match vs. @KalistoWWE, @BaronCorbinWWE vents his frustrations. #SummerSlam https://t.co/R5ng7LkHpA

Then Kalisto went away for a while, and Corbin moved on to a thing with Apollo Crews that ended as quickly as it began, then another one with Jack Swagger of all people, and then Corbin was a surprise announcement as part of the Smackdown Survivor Series team. Turns out that was never the actual plan, though, as Kalisto returned from an almost three month absence and ruined Corbin's day.

This was a brand new side to Kalisto, a viciousness we'd never seen before. So of course, as Corbin was ruled medically unable to compete at Survivor Series, Kalisto was rewarded with a Cruiserweight Title opportunity by horribly biased babyface GM Daniel Bryan.

In that Cruiserweight Title match at Survivor Series, a miraculously healed Baron Corbin interfered and cost Kalisto the match (and Smackdown the Cruiserweight Division), then he cost Kalisto an Intercontinental Title match on the next Smackdown. Corbin was in big trouble, mister, and he was punished by Daniel Bryan. He was made to wrestle Kane, a man who is slightly bigger than him. Cruel and unusual. I'm pretty sure that qualifies as torture under the terms of the Geneva Convention. Anyway, during Corbin's punishment match vs Kane, Kalisto attacked Corbin. A chair was tangentially involved, so naturally Daniel Bryan made a Chairs Match for TLC.

Prediction: Corbin is too good for this "Peter Griffin and the Giant Chicken" feud (as SRS calls it) and Kalisto belongs in the Cruiserweight division, doing the stuff he was born to do.

Corbin should End Of Days Kalisto so hard onto a pile of chairs that he wakes up on 205Live.

So of course Kalisto will win and this feud will continue until the Rumble.