AJ Styles Is Not A 'Flat-Earther,' He Just Maybe Believes Other Planets Don't Exist

AJ Styles Isn't a Flat-Earther, You Guys
He Just Maybe Thinks There Aren't Any Other Planets
But Also He Believes In Aliens

So a few weeks ago, AJ Styles was on Talking Smack, and Daniel Bryan accused him of being a Flat-Earther.

I wrote a whole thing about it.

Here's some video of the segment, to refresh your memory.

After tonight's #TalkingSmack, I hope Bryan changes next week's match between AJ and Harper into a science fair. pic.twitter.com/YWbh4Ure1P

To be fair, AJ Styles did say that he doesn't believe the Earth is flat, necessarily, just that there are some things about it that make sense.

Still, though, AJ can't seem to shake the "Flat-Earther" label.

Well, to put an end to all of the talk, Styles spoke to Sam Roberts and said this:

“I am not a Flat-Earther, but there are some things that they say, (and I think) ‘huh, I never thought about it like that’. ... I could have killed Daniel Bryan for saying (that I was a Flat-Earther) because now you get all this stuff. ‘God, shut up! Please don’t get that started because I’ll never hear the end of it.’ But it’s interesting. ... Here’s the thing, you don’t have to believe anything that’s told to you. Like you can always question anything. And although I’m not a flat-earther, there are some things that, like, make sense. But then again, satellites, the curvature of the Earth if you’re a sniper, you’ve got to take all that into account. I’m not a Flat-Earther, but they bring up some interesting points. It’s interesting and I think you should be able to question anything you want. And you don’t have to agree with everybody.”

Okay. That's cool. Sure. Question everything, don't accept the status quo, I get that. I mean, maybe accept hundreds of years of consensus scientific theory, maybe you could do that, but it's good to know that the whole snipers-having-to-adjust-for-the-curvature-of-the-earth thing has ultimately settled the issue for you.

Anything thing else off-the-wall batshit crazy you want to bring up while we're here?

“I watch all the stuff about aliens. I’m a sci-fi guy. I just enjoy that stuff and conspiracy theories. That intrigues me, so there are just a number of things. ... But I find a lot things interesting when it comes to science fiction or fact. I don’t know. Who can say? The only person that ever told me or told the world that other planets exist is NASA ... " 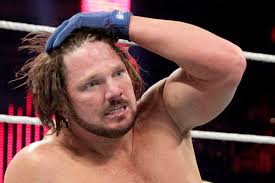 but there’s a reason for all that… they’re making a lot of money, a lot of money. They have a lot of money coming in. NASA is not an American thing. It’s a world thing. A lot of people don’t know that, so when you start asking questions, there are not a lot of answers sometimes.” 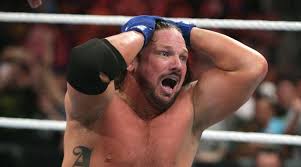 So AJ is apparently saying that he doesn't believe other planets exist in the universe, because he thinks NASA is being paid to lie to the world about it.

But somehow, even though there aren't any other planets for them to come from, he also believes in aliens.

Because that makes sense.

This is you right now:

Maybe just stop talking about this stuff and stick to being the greatest wrestler in the world?

That's probably for the best at this point.