Welcome to the First Week of the

In this column, I'll take a brief look back at last week,
and tie those events in with what you can expect for tonight.

Jesus, what a pile of dog crap.

Stephanie McMahon's idea of a Team Building Exercise is to throw a bunch of guys together who hate each other, including one monstrous mountain of man who appears to derive a kind of sick sexual pleasure from causing humans pain, and then, when they can't get along, she sanctions a match between them all, "to get it out of their system." So that they can them come together as a team and beat Smackdown so that they can win absolutely nothing. And if they don't win the nothing, she's going to fire them all. She's going to fire Seth Rollins and Roman Reigns, her champion Kevin Owens, the most over guy with the most over prop in the company Chris Jericho, and future Ten Time World Champion Braun Strowman. For not winning a match that has no stakes.

All the best parts of last week's Raw all involved Braun Strowman and if you told me that four months ago, I'd have said you were nuts.

But when he growls "I'm on Team Braun" to Jeri-KO, in that glorious voice of his that sounds as though it was dredged up from the bowels of hell itself, it's somehow equal parts frightening, exciting and weirdly soothing.

Can we get Braun Strowman to record a line of audio books? Because I really want Braun to read me a bed time story.

The Five-Way match was fun but ultimately pointless:

But I guess that's the most we can hope for from Raw right now. I mean, unless Sasha Banks is due for her monthly Women's Title Victory, there really isn't any point to any of the crap that happens on Raw. No stakes, anyway.

By the way, when they eventually make Braun into a comedy character (because you know they will), I want it to be as a guy who loves to eat everything. Like Bastion Booger, but with teeth and without the enormous Buddha belly. 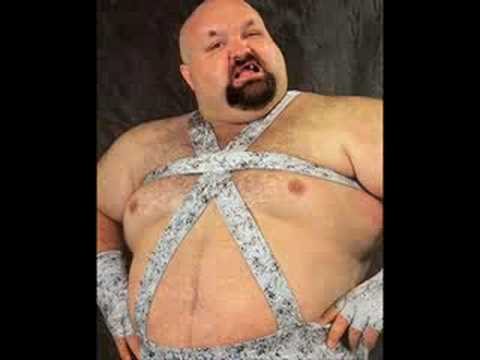 Also without the weird asterisk-shaped singlet.

But then, when Braun overhears somebody says "There's huge stakes in the main event tonight!." he shows up at ringside, looking everywhere, under the ring, in the time keepers area, in the front row, because he heard "stakes" and thought they meant "STEAKS."

Wait. No, I was just kidding. I was being ironic!

Nobody show this idea to Vince McMahon!

He'd actually do it. Any man who's comedy-deaf enough to cackle "like a maniac" every time he hears the phrase "Sparkle Crotch" is a man to not be trusted.

I should never have put that idea out into the world. Too dangerous.

Glas-gowing into business for themselves.

Like maybe a little too much. Like it's uncomfortable for the rest of us to be around. Like when you go out as a group to a big movie premiere or a concert or a sporting event, and you all stop at Applebee's or whatever afterward and there's that one couple that's totally making out at the end of the table. Like really going at it. And it's like, oh that's sweet that they're in love, but seriously, get a room.

Except in this case, that couple is a woman getting smooched by 10,000 rabid drunken Scotsmen (and women) and she seems to appreciate it, but she's a little embarrassed by it, too.

That's what we were all watching last week, and that's why Charlotte was so flustered. Wouldn't you be?

God, why are you making them fight each other instead of having them practice being a team by tagging together to fight all the women who are not on Team Raw and oh wait I just answered my own question, didn't I?

For those of you unclear, this is a picture of all the women on Raw who are not on the Survivor Series team:

Well, no actually, its all of those women in that photo, PLUS Dana Brooke.

Not really sure how much Dana brings up that average, actually.

See, there you go! Unity!
Finally a team captain has their team on the same p---

You know what, screw this, let's move on to a preview of tonight's show.

Here's what's on Tap for Tonight:

As always, these are the actual topics from the actual preview on WWE.com: 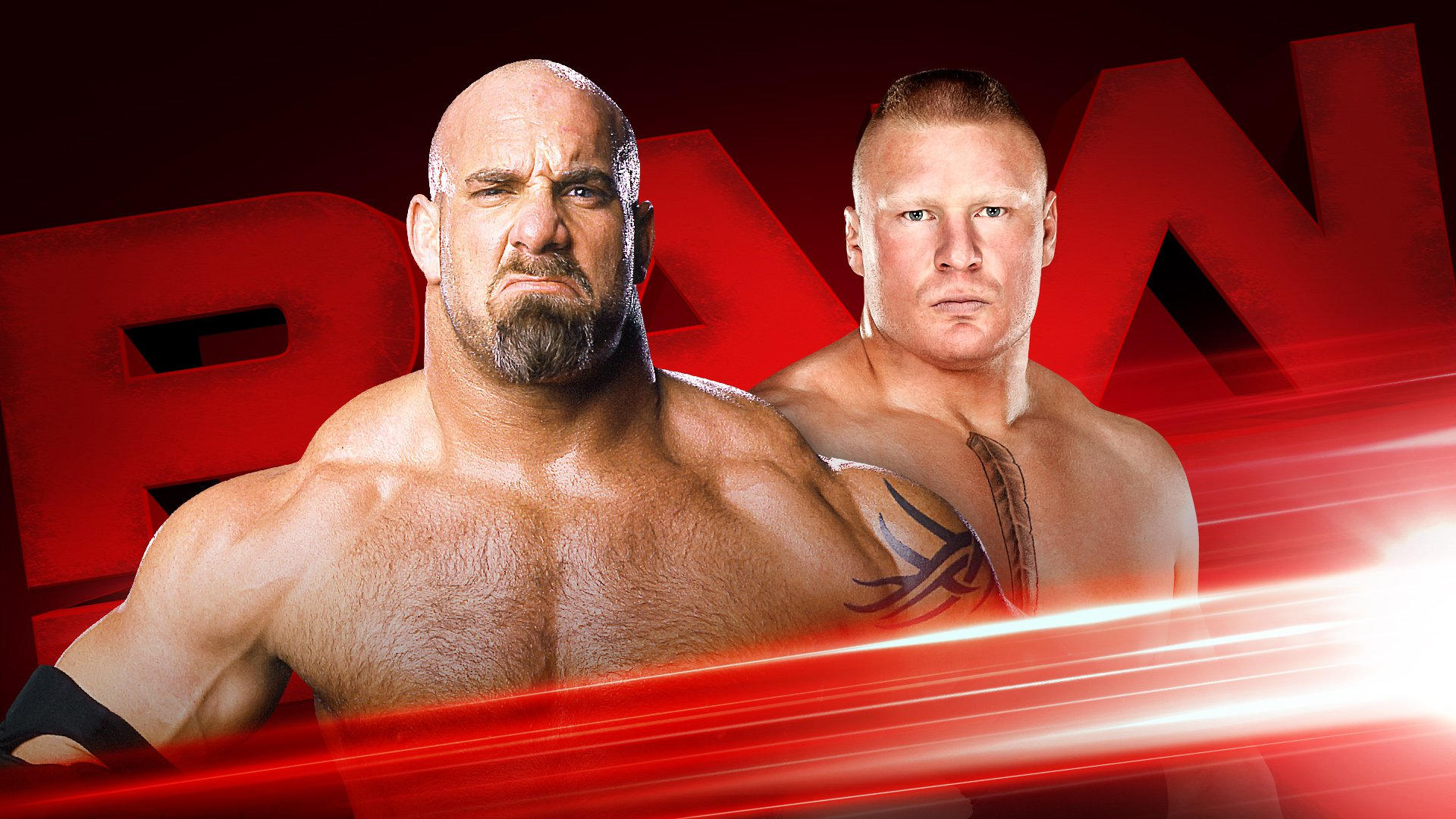 Will Goldberg and Brock Lesnar clash before Survivor Series?

Uh. Yeah. Otherwise why even bring them to the same arena at the same time?

Let me refresh your memory on the things Brock Lesnar said about Goldberg and Goldberg's family:

So yeah, WWE, I think they'll "clash" before Survivor Series. If by clash you mean, have a pull apart brawl. They might even do the thing where security can't separate them, so the entire locker room has to come down to get involved, whereupon I'm sure Rich Swann is going to get tossed into the sixth row like a goddamn car door.

Oh, and maybe they'll have Braun try to break them up and catch a punch from Brock which leads to a stare-down that teases their Royal Rumble match!

Yeah, in case you weren't aware, Stephanie hates her brother Shane. It's understandable if you missed it, they hardly ever bring it up.

Also, Daniel Bryan has been ETHERING Raw on Talking Smack and it's the greatest thing ever. Mick Foley doesn't like when he does that.

Hooray for at least 35 minutes of this Raw being dedicated to the authority figures bickering at each other.

And then, because the WWE either hates us, or is WAY OFF when reading the room:

Oh, good. Just what the country asked for. Another political debate.

Can Team Red form a united front against SmackDown LIVE?

They might have, but you made them punch each other and so now they don't want to work together.

In your quarterly meeting with the head of your department at work, if he made everyone in the conference room punch each other, punch you, would you want to work with them? Would you think your boss was a swell dude?

Yeah, I'm pretty sure it works the same way in wrestling, too.

Is Sami Zayn about to bring the Intercontinental Title to Team Red?

I dunno. Maybe. Probably. Whatever.

I mean, good for Sami, but bad for the Intercontinental Title. The Miz has made it so much more important on Smackdown, and now I fear that if it shows up on Raw, it'll be put on the backburner again.

But maybe Dolph wins, and then I'll complain that they're burying Sami.

Because there's no pleasing me, because I write about wrestling on the internet.

Can The Brian Kendrick keep the Cruiserweight division under the Raw banner?

I've decided that no, there's not a chance of that happening.

They're putting the Cruisers on Tuesdays so that they can seamlessly transition the broadcast from SDLive to 205Live, and even have the Cruisers put on a great match on Smackdown every week to promote the Network.

That's what's going to happen, I've decided it, so Kendrick is going to lose to Kalisto at Survivor Series. It just makes too much sense.

"It just makes too much sense."

Which means Vince is never going to do it.

Come back tonight at 8/7c and follow along with me as I cover the Flagship Live.

Until then, I've been Alex Pawlowski
and this was me when SRS offered me this full time gig.