Overcooked Raw Refresher 12-12: Is It Sunset Yet?

Welcome to this week's edition of

Stu Grayson: I Would Trade 100 Dark Matches For 15 Minutes On TV

Getting you caught up on the big stories from last week
and giving you a preview of tonight's episode.

All the big stories from last week are going to be rehashed tonight, so let's get right to it!

As always, these topics come directly from the official WWE.com preview: 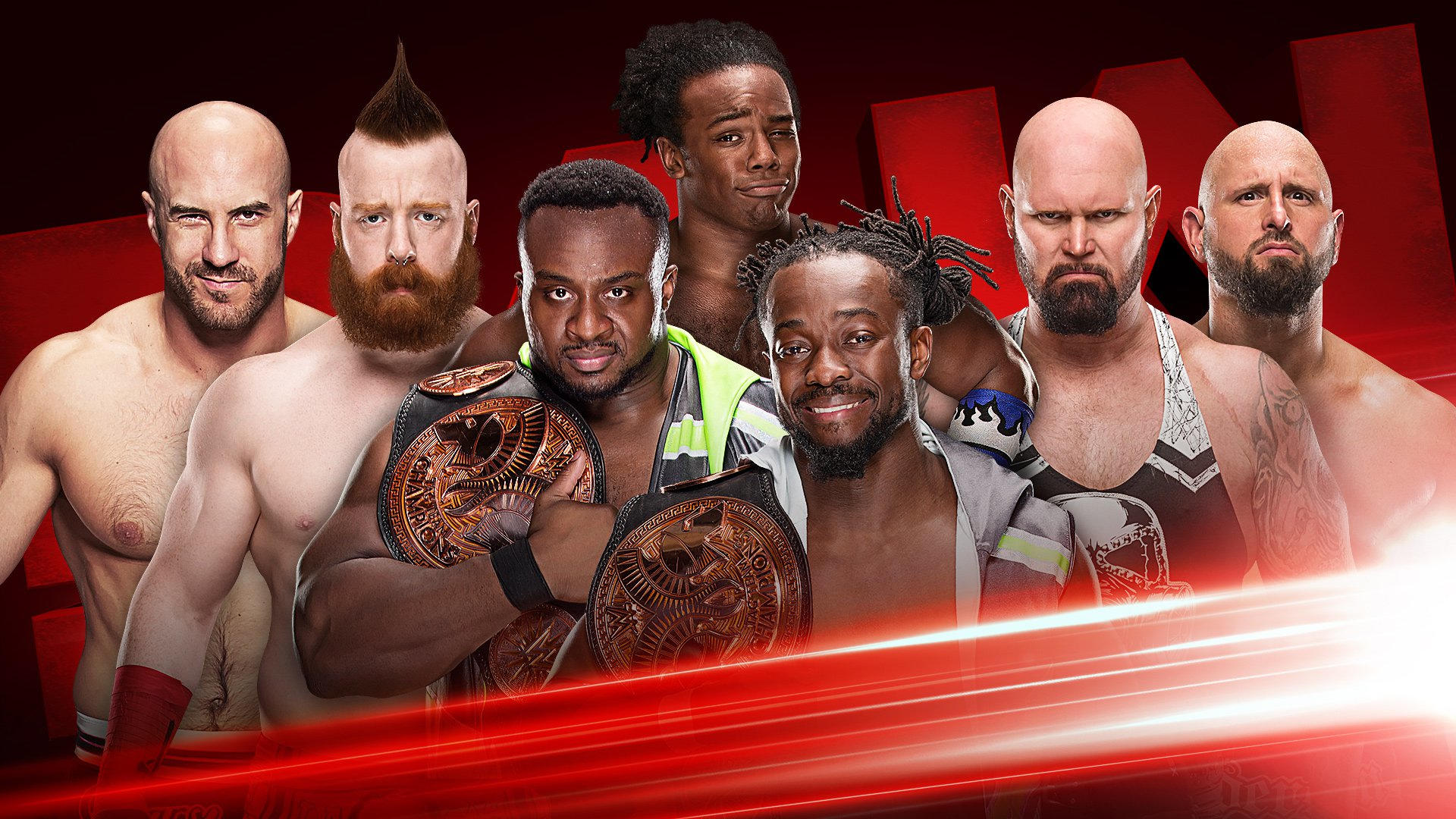 Last week, Shea-saro faced Andy & The Big Gal for the right to have YET ANOTHER title shot at New Day's belts. The New Day was sitting on beanbag chairs at ringside, streaming on Facebook Live because of course they were, so the whole thing eventually broke down and turned into a free-for-all brawl. The match was ended without a winner.

New Day was surprised backstage by Tom-Phillips-in-training, who told them they had to defend their titles in a triple threat match:

Admittedly, this seems unfair.
As Michael Cole shouted,
"THEY DON'T EVEN HAVE TO BE PINNED TO LOSE THEIR TITLES!"
And he's right.
He's unnecessarily loud, but he's rght.

Look, if The New Day wins, they will break demolition's record on Saturday.

We've all kind of accepted that New Day is going to beat Demolition's record. Even Demolition has accepted it.

Those two old men who got dragged into the facepainting booth at the county fair by their grandkids are right. It is a New Day, and progress is good. With a few exceptions, records were made to be broken, and the old guard eventually steps aside.

Unless you're Vince McMahon.

Yes, Vince, who apparently seems to believe that the guys from twenty or thirty years ago are way better than the guys from today are, right now, is in control of this whole thing. And if there's one thing the old son of a gun loves, it's a swerve. Yes, where others zig, Vince McMahon zags. He has said that the funniest thing in the world is seeing a fully-dressed person get pushed into a swimming pool. Probably because it's unnecessarily cruel, but also because of the surprise factor. "He didn't expect that, and now he's all wet!"

Every so often, Vince likes to prove that he's not as predictable as the smarks say he is. And this might be one of those times. Hell, if Demolition wasn't involved in that concussion lawsuit, I'd say that a New Day loss tonight was virtually guaranteed.

But as it is, all I'm saying is that I wouldn't be surprised to see them lose here.

I also wouldn't be surprised to see them win tonight via shenanigans and then have Mick Foley come out and make a rematch for RoadblockEndOfTheLine, where they will actually lose their titles.

Because sometimes, Vince really is as predictable as the smarks say he is.

I'm down for this "Iron Woman" Match, and not because it's "another first." I'm down because I think these two ladies are gonna kill it. They might also kill each other, but that's par for the course at this point.

I also LOVE wrestling matches with time limits. I don't know what it is, maybe the frantic nature of the competitors trying to make a pinfall before the clock runs out, the added stakes of it all.

I used to love the old WCW Television Title Matches, contested with a fifteen minute time limit, because you were just as likely to see a hard-fought 15 minute battle that lead to a time-limit draw as anything else, which inherently fed the rivalry between the competitors. When a pinfall or submission finally did happen, it meant more. I hope the Iron Woman match main events RoadblockEndOfTheLine, if only to see the Anti-Women's-Division brigade bitch and moan all over Twitter.

Oh, and also, I should mention that Charlotte and Sasha seem to be locked in a battle over which one of them is really Ric Flair's daughter, I think.

Which is a battle that I'm pretty sure was contested between two parties in many a family court in the 80s and 90s.

I can't deal with this right now, you guys.
The hearbreak is too recent.
The wounds are still too fresh.
I mean, I'm trying to keep it together, but ...

PLEASE JUST GET BACK TOGETHER. REMEMBER THE GOOD TIMES!

They started these promos ELEVEN WEEKS AGO.

Quick, how long ago does it seem like since we first saw that Donald Trump Access Hollywood Bus "Grab 'em by the kitty" tape?

THESE VIGNETTES STARTED BEFORE THAT.

They did ten of them.

Here they all are, in order:

Wow. That's a lot of montages of Emma in various states of undress, backed by terrible pop music. I think one, or at the most two, would have sufficed, but you're right, they definitely made the right call in dragging this thing out for as long as possible.

As for Emma(lina), I hope she comes back and she's still Evil Emma, complete with Aviator Shades and Leather Half-Gloves and Sometimes Shoulderpads For Some Reason, except now she's also an Instagram Model? I guess?

But mostly, she should immediately re-team with Dana Brooke. Those two were great together back in NXT and it would be a shame if that great interplay and her tremendous heel-work was shunted aside in favor of a gimmick that appears to be "She's Pretty Photogenic, huh?"

Regardless, I look for her to immediately go after Bayley. It is the go-home Raw before RoadblockEndOfTheLine after all, and Bayley ain't got nothing to do at the pay-per-view, so why not build a little something for the pre-show at least. Have Emma win dirty there to keep the feud going if you're still gonna do Banks vs Flair headed into the Rumble, and if you're not, have Bayley win clean to get some momentum before her new program with Charlotte.

I will also accept Emma immediately joining Charlotte, Dana and Nia Jax(!) in Charlotte's own Actual 4 Horsewomen stable. When Flair inevitably turns on Sasha and reveals it was all a set-up, he can become their JJ Dillon and manage the hell out of them. Sasha and Bayley can basically be Sting and Dusty Rhodes.

Okay. Last word on the matter. I promise.

If you're upset that a New Jersey douchebag with a leopard print fetish is calling you a turkey who needs to be stuffed, I understand. I'd be upset too.

You absolutely should stand up for yourself, and if you're doing it on behalf of young girls everywhere, teaching them that they don't have to accept that kind of treatment, all the better.

Laying a trap using your feminine wiles and a planned out marriage break-up skit, luring said New Jersey douche to your hotel room with the promise of sexual intercourse, while your husband lies in wait in the bathroom, and then just as the New Jersey douche realizes his mistake and his about to repent for all of his douchey transgressions against you, THEN you call out your giant rage-filled Bulgarian husband, who proceeds to beat the New Jersey douche half-to-death with a lamp and a flower vase and drag him out into the hallway and leave him for dead...

Anyway, if this leads to Enzo being incapacitated somehow, it could really help develop Big Cass as a character. Some of the best work he did in NXT was when Enzo was sidelined with a real-life broken leg.

That's how we stack W's, indeed.

I mean, if he did, it would kind of render pointless the whole argument they had two weeks ago. But still, yeah, why not?

Sami got put in a match with Kevin Owens last week, held his own and even dominated for a stretch before losing to a Pop-Up Powerbomb #OuttaNowhere, so he definitely deserves a reward.

That reward? Sentencing him to death at the hands of a partially shaved grizzly bear.

I mean, this is General Manager Mick Foley we're talking about.

He'll probably book Sami in a Steel Cage, No Holds Barred, Barbed-Wire-Baseball-Bat-On-A-Pole match and then yell at Sami for agreeing to it.

Come back tonight for my Live Coverage of RAW
and stick around for the post-show podcast.

Until then, I've been Alex Pawlowski
and this is me when my thoughts begin to wander
to the break-up of Jeri-KO.