Drop down in the comments and join our
LIVE VIEWING PARTY! 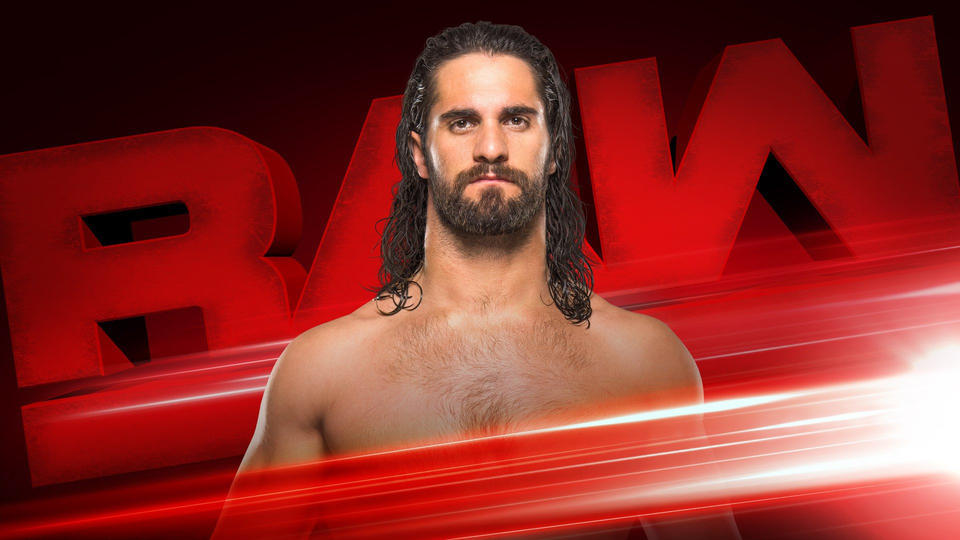 Seth Rollins speaks about his injury! 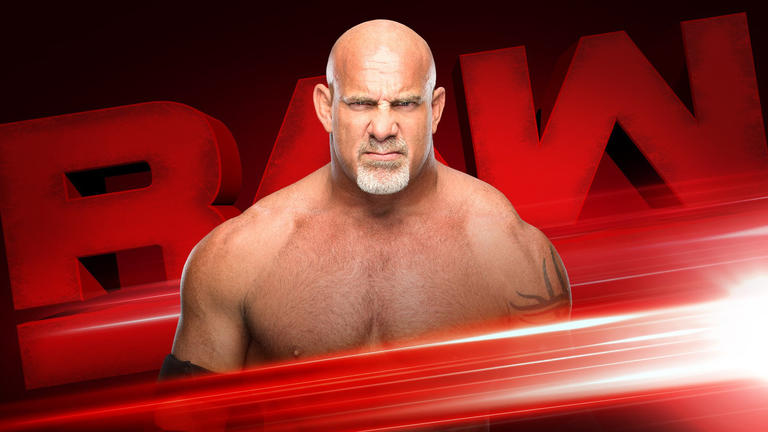 Goldberg does something probably!

Also, nothing really happens because it's a go-home Raw
before a place holder pay-per-view!

Goldberg says that Kevin Owens is all talk.

He says he's in a good mood.

He says that he's six days away from being champ.

The Goldberg chants start up again.

He is sweating A LOT, you guys.

He is also promising a lot of people that he's going to win.

He's about to leave, then Kevin Owens' music hits, and he comes out, dressed in a suit again.

He stays up at the top of the ramp.

KO says that he's in a good mood, too, because he gets to tell Goldberg to his face how he's going to beat him.

He talks about how he promised himself that he was going to grab this companry by the throat.

He lists all the guys he beat along the way to get to today, and then he says that Goldberg is next.

Goldberg says that the speech pissed him off, and he says "Why wait till Sunday?"

He says that Sunday, the Goldberg chant dies.

"YOU @Goldberg ARE NEXT ... in the evolution of @FightOwensFight as Universal Champion!" - Owens to Goldberg, #RAW pic.twitter.com/vb1vs2kMLw

Well, at least we got Goldberg out of the way early so we can move on to more important things.

The New Day have new shirts where they appear as popsicles.

The shirts, not the New Day, although at this point, I'm not even sure I can defend them any more.

They know this because there's an envelope or whatever.

The audience is SILENT, by the way, and with good cause.

It is terribly unfunny.

I was so discouraged by the awfulness of that Oscars joke, I didn't even pay attention to the first minutes of this meaningless match, but apparently this happened:

Back from the break, and the heels are in control.

Woods is being worked over and worn down, by the bigger men.

Oh yeah, didn't I mention, it's Woods and Big E. Kofi's on the outside.

Woods keeps getting beat down, and I can't believe I'm still awake.

Woods hits an Enzuigiri on Rusev and both E and Mahal are tagged in.

Mahal gets Belly to Bellied a bunch of times, then Big E splashes him, and Woods is tagged in.

He hits a flying cross body on Mahal but the pinfall is broken up by Rusev.

Kofi starts talking to Lana and Rusev stops doing wrestling things to yell at him.

Woods takes advantage with an O'Connor roll and a Bridge.

But are they winners? Are they?

I mean, they're involved in this bullshit, so no, not really.

Enzo is being incredibly annoying.

So what else is new?

They're talking about how they just need to bide their time until they get another shot at the tag titles.

Samoa Joe shows up and vaguely talks trash to Cesaro.

Sheamus wants to fight him, Cesaro says he'll handle it.

PLEASE CAN WE SEE THAT MATCH NOW THANK YOU.

Stephanie says she needs to apologize to Mick.

Not for threatening to have him killed last week.

For forgetting that he's a feeble, weak, broken shell of a man, and he never should have been given this job.

She leaves and Mick doesn't say anything.

Tozawa is amazing, a ball of fury.

Noam Dar's trunks say "No Role Models" on the butt.

Tozawa fights back, hits a botchy hurricanrana, then a Suicide Dive headbutt.

He rolls Dar back in the ring, there's a flurry or dodges by both men until Tozawa hits his snap bridging German suplex.

After the match, Brian Kendrick attacks Tozawa from behind, lays him out and gets on the mic.

He says it's Lesson #3, always have eyes in the back of your head.

Oh, byt the way, this match is happening on the FastLane kickoff show:

Joe says he's nobody's puppet. Nobody tells him what to do.

Mick Foley says he's still the Raw GM, and as such, he DOES tell Joe was to do.

And he tells Joe to go get dressed because he has a match with Cesaro tonight.

She says that Bayley is egocentric and greedy, since she didn't give back her championship last week.

She says that Bayley doesn't care how she won, and blah blah blah.

Finally Bayley comes out and gets in the ring.

Charlotte calls her a cheater, Bayley calls herself a champion.

Bayley says her dream is to walk into WrestleMania as champ.

Charlotte says she won't make it that far.

Sasha Banks comes out, with a microphone, puts over Bayley.

Sasha says let's have that tag match that we're scheduled to have.

Charlotte says that Dana isn't going to be her partner thought.

(This is news to Dana by the way.)

Tag match after the break.

Nia starts off against Sasha, throws her all around the ring, then does the same to Bayley.

Bayley wriggles out of a vertical suplex, and winds up in the corner, dodging a running splash, Sasha tags herself, they attempt a double clothesline on Nia, she knocks them down instead.

Charlotte gets in, then Sasha and Bayley take turns against Charlotte.

Bayley reverses an irish whip, Charlotte winds up on the outside.

BAYLEY TO BELLY ON THE FLOOR!! @itsBayleyWWE #RAW pic.twitter.com/76uZy8gRr9

Oh, look at that, the heels are in control after the break.

Nia Jax looking like a million bucks here, including this awesome no-sell of an arm-drag.

But eventually Sasha makes the hot tag to Bayley, and after Bayley makes quick work of Charlotte, Nia Jax smashes Bayley, plucks Sasha out of the air, and BODY SLAMS HER ONTO BAYLEY,

Braun Strowman demands a contract signing tonight for his FastLane match with Roman Reigns so Roman can't back out of the match.

Braun says he wants Roman's name on a contract, OR ELSE.

Cass immediately gets distracted by Anderson on the outside, and Gallows kicks him a couple times, then takes control.

Cass fights back, and goes for a chokeslan, Gallows gets out of it immediately, but Cass dodges a kick and lands an elbow to the teeth.

Cass hits a fall-away slam, then a sidewalk slam, then the Empire Elbow, then Enzo throws Anderson into the steel steps on the outside.

And Cass hits a big boot.

And that's all she wrote.

This match that nobody asked for is apparently the result of this:

Before the match starts, Titus attacks Sheamus before the bell, and throws him into the ring apron ribs first, then beats him down in the ring,

Then Sheamus catches him with a Brogue Kick and Titus is out cold.

They show a great video package of the Triple H-Rollins feud.

Then Rollins hobbles down to the ring with the aid of a crutch.

He hugs Graves, then they sit down.

Seth Rollins says it's been really hard. He seems depressed.

Rollins is doing a great job with this. I genuinely feel for him.

This is a fantastic, true face turn.

He says this might all be his fault, for not appreciating what's been given to him.

He says the doctors aren't going to clear him before Wrestlemania.

Samoa Joe is also there, on the outside of the ring.

Triple H tells Rollins "You will NOT be at WrestleMania."

Triple H says that Rollins should have known that this was coming.

It was all eventually going to come crashing down.

Because Triple H made it happen, and he could take it all away whenever he felt like it.

He calls Seth "just another washed up, beat up superstar" "worthless."

(That's not foreshadowing. Not at all.)

Seth tells Triple H that he will be at Wrestlemania, and since he has nothing left to lose, he's going to make sure that if it's the last thing he ever does, it will be the last thing Hunter ever does.

"I WILL BE at @WrestleMania, and if it's the last thing I ever do ... it'll be the last thing YOU ever DO!" - @WWERollins to @TripleH #RAW pic.twitter.com/KrvgWaVTdd

Big Show wins this in about two and a half minutes.

Well, at least the #ShiningStars still have a tropical resort to retreat to, after their Handicap Match vs. @WWETheBigShow! #RAW pic.twitter.com/MzuoB3EXb3

They admit they are long lost brothers.

Nah, I'm just kidding, they talk about wanting to beat up Jack Gallagher.

Neville beats on TJP, then roughly tags in Nese. Perkins nails a desperation kick, then tags in Jack.

Neville runs in to break up a pinfall, gets headbutted out of the ring,

Nese gets put throught the wringer, kicked in the head a lot, then put in an interesting Submission move by Jack.

Neville makes a deliberate decision not to help, and Nese taps.

I guess Neville is not his brother's keeper.

Congratulations to @TheBethPhoenix on her upcoming induction into the @WWE Hall of Fame! #RAW #WWEHOF pic.twitter.com/lxpwXtn0o7

Sasha says she'll be in Bayley's corner on Sunday.

Stephanie McMahon comes in and says don't worry about that, you've got your own match.

This crowd doesn't deserve this match.

Cesaro starts out with a deadlift gutwrench suplex, then a flying cross body.

Looks like @WWECesaro is quickly realizing he needs to pull out ALL the stops to defeat @SamoaJoe! #RAW pic.twitter.com/EiVgMC0n80

But somewhere along the line, he tweeks his knee, and Joe immediately targets it.

Samoa Joe keeps going after the knee, then hits a HUGE Uranage.

After the match, Joe is interviewed and he talks about how he came to Raw to hurt people.

He mentions Sami Zayn, and Sami's music hits. Sami ambushes him from the side.

Security has to break them up.

While Sami is occupied with them, Joe hits him with a cheap shot.

Zayn hits a running tope off the stage onto Joe.

We're probably getting that at FastLane.

Braun comes out first and tells Mick Foley to get out of the ring.

Braun says no you don't.

Mick gets in Braun's face says he's had enough of being talked down to.

Roman comes out, they brawl on the outside,

then it spills into the crowd.

And Roman spears Braun through the barricade backinto the timekeeper's area.

He also obliterates some poor dude.

He gets in the ring and is about to sign the contract when Braun gets to his feet.

He gets in the ring, takes another Superman Punch, and then throws Roman chest-first into the top turnbuckle so hard the turnbuckle explodes.

Braun goes up to the top of the ramp, looks back to see Roman signing the contract.

This was a cool segment.