Raw Live Coverage and Discussion: Who Can Stop the Wrath of Braun?!

Welcome to Fightful.com's LIVE coverage and discussion for 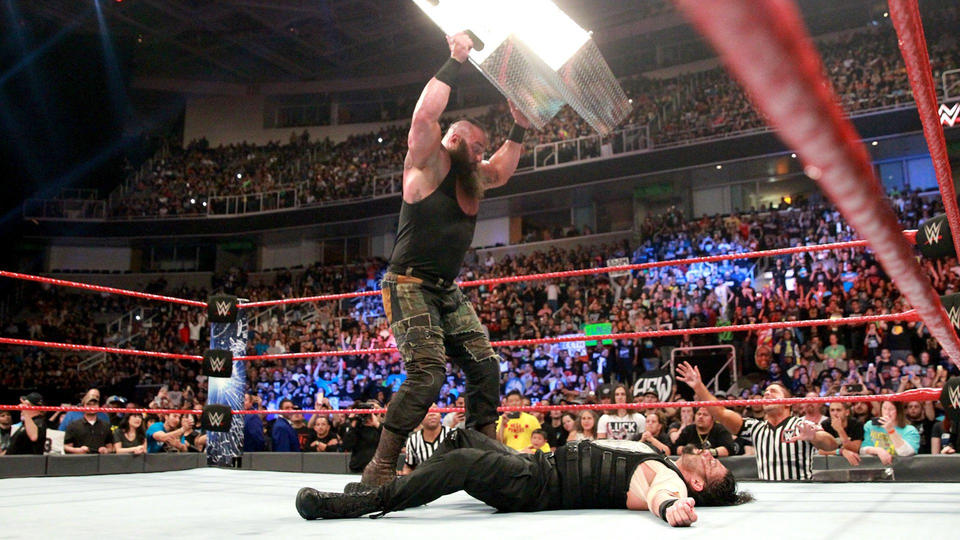 At last night's PPV Payback, we witnessed perhaps the fall of the Roman Empire, with Braun absolutely obliterating Roman Reigns. Not only did Braun Strowman win the main event, because that is never enough for Braun, he went on to fully assault Roman. He used the steel steps to his advantage and crushed Roman with them. By the end of the night, Roman was spitting blood from his mouth and could hardly move. Will we see Roman tonight? What condition is he in exactly? Does Braun have another target in mind, or is he content with beating the crap out of Roman any chance he gets? It seems that nothing can satiate Braun's thirst for blood, but tonight we may get some more answers.

We also have a new Raw Women's champion, Alexa Bliss, who is the first woman to hold both the Smackdown Live and Raw Women's Championship. Who will come after that title first? Will Bayley be getting her rematch in the near future?

Lots of questions tonight, so let's see what Monday Night Raw has in store for us. Are you ready?

The women of the Raw roster are in the ring to start and Alexa Bliss the new Raw Women's Champion makes her way to the ring.

Alexa says that she made Kurt Angle have all the women present in the ring. She says the "Queen" is dead, proclaims herself a "goddess". She says she deserves a coronation, she thanks Mickie James and throws digs at Mickie being older than the rest of the roster. Alexa then thanks Sasha Banks, thanking her for pinning her to get where she is at by pinning her. Alexa accidentally bumps into Nia Jax and doesn't talk any smack to or about Nia. Alexa gets on a platform and talks down to Bayley. If it weren't for Bayley, Alexa being champ wouldn't be possible. Alexa doing great on her promo cutting down the rest of the roster. She really cuts into Bayley talking about her family, Balyey overturns the platform sending Alexa flying and all mayhem breaks lose in the ring with the women all fighting against each other. Commercial break.

Emma and Bayley are legal and Bayley gets Emma's arm, tags in Mickie and Mickie starts working on the same arm Bayley was. Kick to torso of Emma, kick to face, takes her down, tag to Dana. Emma makes tag to Fox. Fox gives kicks and punches, Fox in turnbuckle, handspring elbow by Dana to Fox, cover by Dana and kickout by Fox. Tag to Sasha and then tag to Bayley. Double team to Fox, cover and kickout by Alicia. Then James is in and goes for a cover, then kickout. Fox needs to get to her corner. Banks is tagged in and tries for another cover on Alicia.Sasha with double knees to Fox and goes for a cover again but she still can't get the win. Fox gets some momentum and throws Sasha out the ring. All the women face off outside the ring and so far Sasha and Fox are still legal. Commercial break. Fox in control, goes for a cover on Sasha and kickout. Fox makes the tag to Nia and elbow drop onto Sasha's back, Nia is just tossing her around the ring. Nia with another elbow drop, and another, cover and kick out. Bayley and team are trying to rally the crowd but Nia for sure has the upper hand. Bliss is tagged in, stomps on Sasha's head, cover, kick out by Sasha. Sasha runs into huge clothesline. Hot tag to Baley and she does work on Alexa in the turnbuckle. Suplex to Alexa and goes for cover and Nia breaks it up. Nia to the outside, Mickie jumps on Nia, mayhem has broken loose, kick to Emma by Sasha the non legal women are fighting on the outside. Alexa gets Bayley's eyes, DDT to Bayley, cover and pin by Alexa.

Up next, singles action with Enzo Amore vs. Gallows. Enzo is confident he will beat Gallows, from behind Anderson and Gallows attack Enzo and Cass. Cass helps Enzo take out the two who revert back to the ramp. Commercial break.