Welcome to an Abridged, Severely Belated Edition
of the

My Anniversary Vacation Get-Away last week kind of precluded my being able to write my usual reaction pieces, but I wanted to publish something about last week before it got away from me.

If you enjoyed it, I'm sorry, but this sucked.

I loved James Ellsworth as the first ever Braun Strowman jobber-victim. "Any man with two hands has a fighting chance." Brilliant.

I even liked using him when AJ Styles needed a Tag Partner during the build-up to No Mercy and Daniel Bryan put him in the match, only to get jumped by The Miz, and Skull Crushing Finale'd onto the steel ramp.

But this was stupid.

AJ Styles is better than this. As a matter of fact, he's probably the best in the company, if not the world. He doesn't need to be granting non-title matches to a chinless novelty act.

And Dean Ambrose, fresh off his shift playing Red-Beard The Pirate at a local theme restaurant, coming down to the ring to complain about AJ being the only one in the match at No Mercy who knew the rules, is just weak. Just because you didn't study for the test, Dean, that doesn't mean you can bully the kid who aced it. AJ knew that he wouldn't be declared the loser if he tapped out to both of his opponents simultaneously (even though this NXT Triple Threat Match between Baron Corbin, Sami Zayn & Samoa Joe would beg to differ) and he was the only one smart enough to realize that it was a No-DQ match, and those chair shots he gave to Cena would be totally legal.

Don't whine about losing Dean, it's not a good look for you.

And it wasn't a good look for Daniel Bryan, as the meddling babyface GM, making Dean Ambrose the Special Guest Referee. That was just a terrible choice, as it allowed for Dean Ambrose to either be purposefully incompetent, super-duper wacky or both: 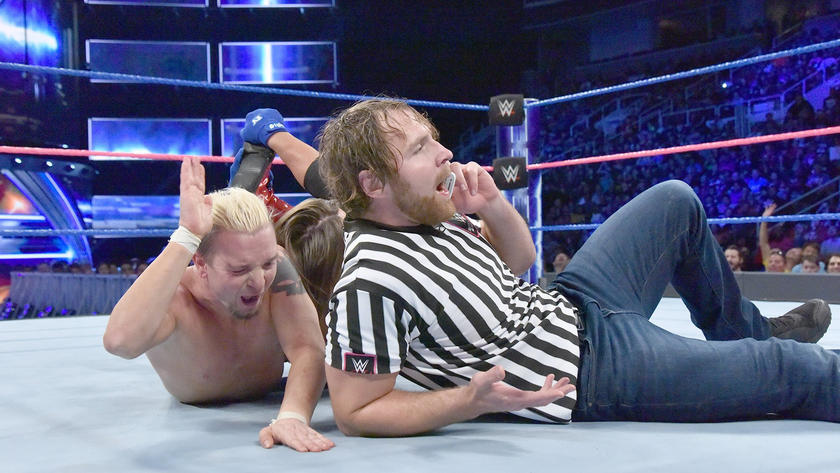 This guy's crazier than a Motorized Wiggle Pen! 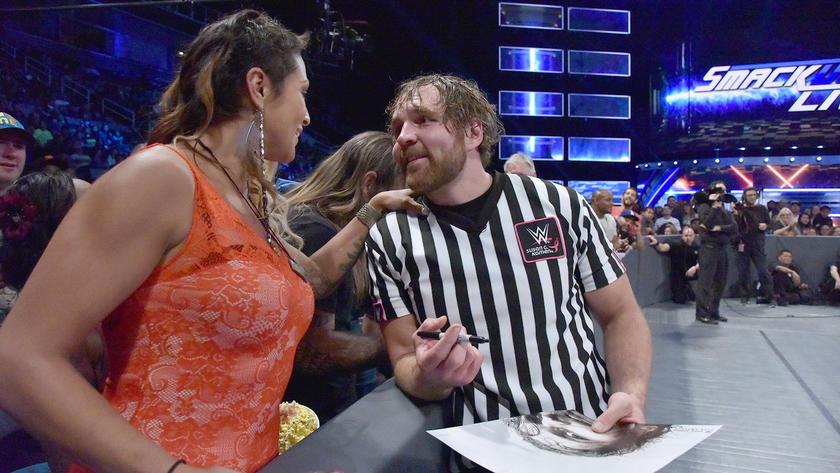 They even had plants in the audience for him to be crazy with!

And then, of course, he blatantly cheated, hitting AJ Styles with not one but two Dirty Deeds and pulling a probably-should-have-been-dead Ellsworth onto Styles and giving him a fast count for the victory. 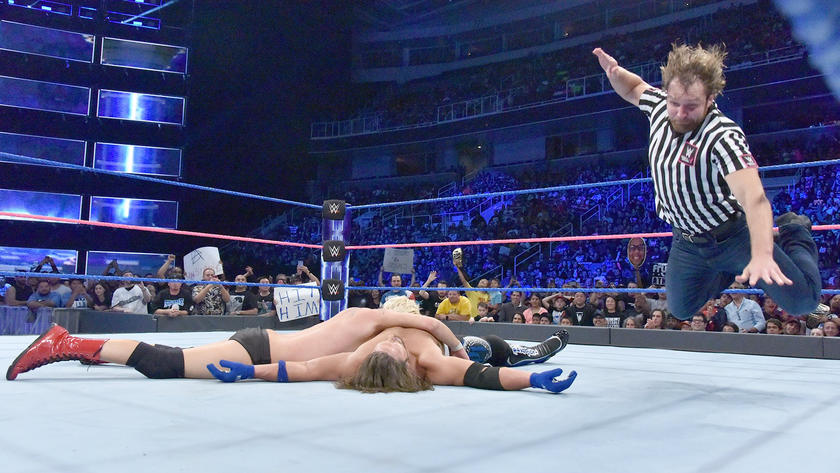 Oh, and about that whole "probably-should-have-been-dead" thing, the next time you book a guy who doesn't know what the f*ck he's doing, maybe teach him how to take the other guy's finisher so that 3 million people don't watch a man die on Live television. 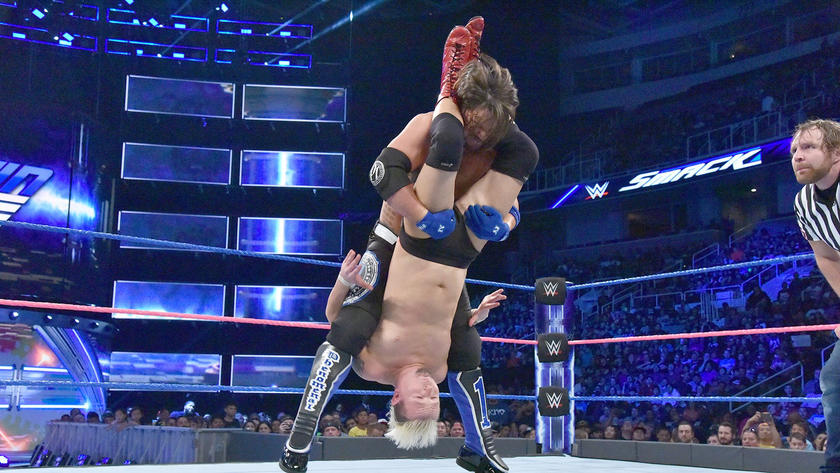 Pictured: A man who should be dead, a man who might have killed him, and an incompetent boob.

So then what does Daniel Bryan do, to waste all of our time, and AJ's time, and poor should-have-been-dead James Ellsworth's time?

This kind of lame attempt at comedy belongs in the midcard.

But somehow, the midcard is where the all the good stuff is. 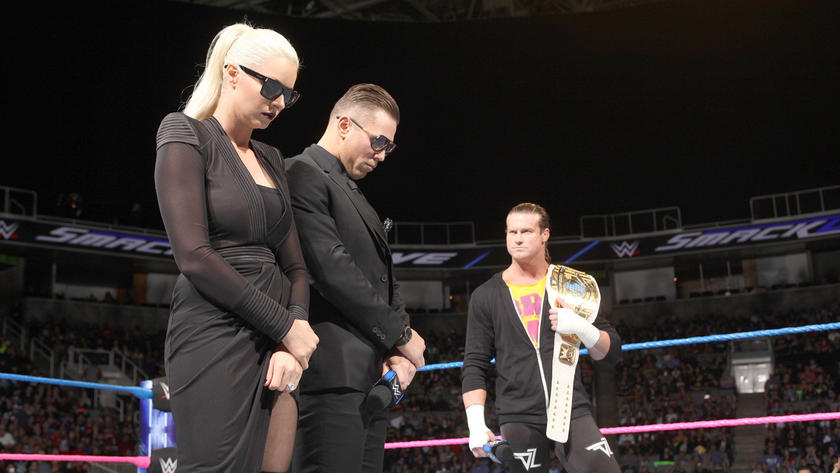 The Miz interrupts Ziggler's "OMG WE DID IT YOU GUYS I NEVER COULD HAVE DONE IT WITHOUT YOU" promo to stand in the middle of the ring, wearing all black, and mourn.

He's mourning not the death of his Intercontinental Title reign, but the DEATH OF THE INTERCONTINENTAL TITLE ITSELF.

This is gold-plated gold.

And the IC Title may be dead, but The Miz HAS NEVER BEEN MORE ALIVE.

What I did not like was Dolph Ziggler making fun of Miz for showing emotion at the loss of his IC Championship back at No Mercy.

Because he is a man, I guess, and men don't cry?

Then, somehow, in 2016, bringing out the Spirit Squad got a huge pop, and Ziggler fought his way out of a handicap match.

The Spirit Squad, yo.

And they are entertaining and vital to the success of this storyline.

What even is life at this point?

Junior Detective Randy Orton
and the Case of the Disappearing Demon.

This would be a hell of a lot more compelling if I didn't know from past experience that Kane is going to show up on Smackdown tonight like nothing ever happened, none the worse for wear, and no one's ever going to give an explanation for what happened, or why.

It's going to be Mauro Ranallo saying something like:

"JUST LIKE MY CREDIBILITY AS A BROADCASTER WHEN I TRY TO SHOEHORN IN A POP CULTURE REFERENCE INTO EVERY SENTENCE, KANE HAS DISAPPEARED WITHOUT A TRACE!"

Nothing much else worth talking about, so here comes the LIGHTNING ROUND:

I WANT THESE SURVIVOR SERIES MATCHES TO GO FOR 45 MINUTES EACH.

Three Survivor Series Matches, then Brock vs Goldberg. Call it a night.

Jimmy Uso is a dick to knees, and his shoes are dicks to my eyes.

Seriously, I think they might be radioactive.
They can definitely be seen from space.

Also, who does that? Who puts their foot on their friends butt so as to create leverage for a pin?
Is that a thing?

This treading water stuff until you're healthy enough to face Alexa Bliss, it's not going so well.

We're still doing Distraction Roll-Up finishes, and the Women's Revolution is over a year old.

I weep for my unborn daughter.

At this point, just future endeavor the poor S.O.B.

This is the worst new character roll-out that I can remember and need I remind you, The Shining Stars exist and are currently on television for some reason.

This was by-far the worst episode of Smackdown since the brand-split, and you know why?

All in all, I watch enough Raw on Monday Nights, I don't need to watch it on Tuesday Night as well.

Here's hoping that SmackDown returns to its former glory tonight.

Oh wait, I forgot, they gave a title match to this walking rag doll.

Looks like I'm just watching SmackDown for the Miz again this week.

Until Next Time, I've Been Alex Pawlowski
and this is me trying to figure out why the WWE is giving James Ellsworth a title match.