While the purpose of today’s earnings was originally supposed to be a recap of WWE’s 2019 fourth quarter and 2019 as a whole, the biggest story of the past week was the departure of Co-Presidents George Barrios and Michelle Wilson.

On a micro level, it may not have much of an immediate impact in regards to the in-ring television product, but on a macro level, the fallout has been devastating for the company’s stock and market cap (the total value of a company’s shares of stock). Shortly after the market closed on January 30, news broke that WWE Co-Presidents George Barrios and Michelle Wilson had departed the company, effective immediately. This left the company's stock to drop by more than 27 percent in the ensuing days and the drop in stock equate to approximately $1 billion in market value.

Jim Crockett Jr Passes Away At The Age Of 76

Many questions were raised in regards to the news, but the biggest one was perhaps, “Are WWE’s financial numbers for the final quarter of 2019 worse than projected?”

In actuality, the departures were barely addressed with a bullet point on the 2019 Operating Highlights slide saying WWE "announced a management transition that did not reflect a change in strategy. We remain highly focused on growing the value of our content, furthering international expansion and engaging fans across all platforms. The decision was based on different views on execution and areas of focus."

The other major concern regarding the fourth quarter was the lack of a broadcast deal in the MENA (Middle East and North Africa) region. It was a big concern in the third quarter which the now-ousted Barrios mentioned on that respective earnings call was a key reason for WWE changing its previous OIBDA projections for 2019 from $200 million to somewhere in the range of $180 million and $190 million, which would still be an all-time company record.

From the new television deals inside the United States, as well as substantial financial benefits with the Kingdom of Saudi Arabia, WWE still produced record numbers in terms of overall revenue and adjusted OIBDA. Those same new deals, along with the seemingly inevitable new deals in MENA and India, the company still projects 2020 to be another successful year for the company with a new company record in adjusted OIBDA, despite uncertainty in regards to the completion of those deals and the future of the WWE Network.

WWE's revenue did go up by three percent as 2019 concluded, finishing at $960.4 million (from $930.2 million in 2018) with new U.S. television rights deals with FOX and NBCUniversal, which allows Raw to keep being televised on USA Network, being a key reason for the growth in revenue.

As far as the company's adjusted OIBDA is concerned, WWE finished the year at $180 million, which is about as low as it could have gotten while staying within projections. Regardless, it still is an all-time company high, up one percent from 2018's adjusted OIBDA of $178.9 million.

“For the year, we achieved record revenue and Adjusted OIBDA. However, with the delay in completing a Middle East distribution agreement as well as lower business performance than anticipated, our results were at the low-end of guidance,” added Frank Riddick, interim Chief Financial Officer. “As we work to strengthen engagement in 2020, we are pursuing several strategic initiatives that could increase the monetization of our content, including the distribution of content in the Middle East and India as well as strategic alternatives for our direct-to-consumer service, WWE Network. Excluding the potential impact of these initiatives, we expect significant revenue growth based on the full year impact of our new content distribution agreements in the U.S. and anticipate Adjusted OIBDA of $250 to $300 million. Management believes it has the potential to exceed this range, but is unable to provide additional guidance at this time.”

WWE completed content distribution agreements with BT Sport and ViacomCBS’ Channel 5 in the U.K., Fox Sports in Latin America, PP Sports in China and SuperSport in Africa. Thanks to the revenue from those deals, overall revenue increased 18 percent to $322.8 million last quarter year-to-year.

By this time, investors were hoping to get an update on the completion of a broadcast deal in MENA and India, but that is still yet to happen as WWE is still "in the process of negotiating its core content agreements" in both regions.

When asked on why it has taken so long in securing new deals for both regions, Riddick mentioned that regulatory changes in India have delayed negotiations and in the MENA region, intricacies with the Saudi Arabia government have made things uncertain in regards to the time and amount, but Riddick does assure that any uncertainties isn't related to whether or not those deals get completed.

For the first quarter of 2020, WWE estimates its first quarter Adjusted OIBDA being somewhere between $60 million to $65 million. The increased OIBDA is due in part to not only the new U.S. rights fees with NBC Universal and FOX but also the fact that WWE is having its first major show in Saudi Arabia in February, the earliest the company has ever done a show in the country of this magnitude. The higher estimate is partially offset by an increase in operating expenses associated with developing new sources of revenue and reflecting the full-year impact of 2019 investments. The former includes higher costs to accommodate the production of SmackDown broadcast live on Friday nights and to produce an additional hour of NXT on Wednesday nights.

As far as what the television product had to offer in the final quarter, SmackDown and NXT began its new journey airing live, weekly shows on FOX and the USA Network, respectively.

We've seen how those deals have substantially impacted WWE's overall revenue and OIBDA for 2019 and that is with the fourth quarter being the only one that could even take advantage of those new deals. This past quarter saw revenue go up 29 percent to $264.6 million (a company quarterly record) year-to-year.

Barring anything bizarre from happening at any point this year, these new deals will be a major reason WWE is likely to produce record revenue numbers once again this year. 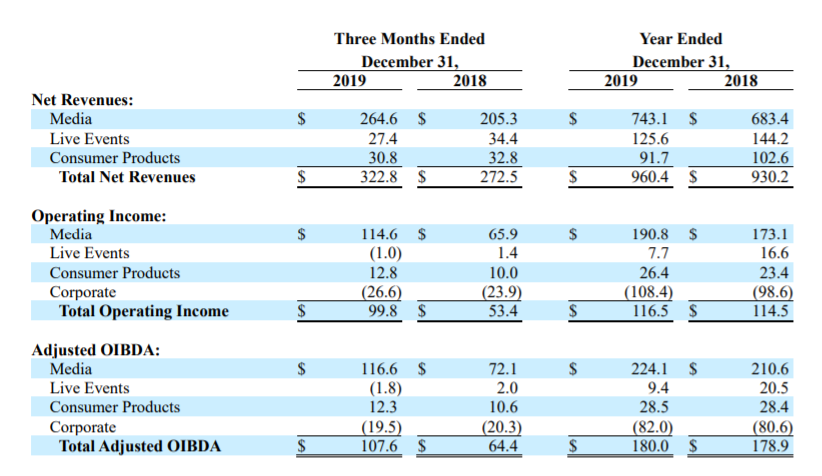 As far as television viewership and ratings are concerned, whether or not the past quarter has been a successful one depends entirely on what metric one uses to analyze television numbers and what show they are looking at.

SmackDown, thanks to its deal with FOX, saw a noticeable increase in viewership and ratings in the 18-49 demographic. For the fourth quarter, SmackDown averaged 2.607 million viewers per show on the 12 episodes it aired on FOX (through overnight numbers provided by Showbuzz Daily), excluding the October 25 episode, which aired on FOX Sports 1 and failed to average more than a million viewers. After its premiere episode on October 4, the show has largely remained in the 0.6-0.8 rating in the 18-49 demographic, winning that demographic on many nights going up against other primetime programming on ABC, CBS, CW and NBC.

The change from USA Network in the third quarter to FOX in the fourth quarter resulted in a viewership increase of approximately 600,000 per episode. SmackDown last quarter also performed better compared to 2018's fourth quarter, which was 2.141 million per episode.

NXT's start on USA Network can be examined in one of two different ways. On its own, averaging 785,307 viewers per show across 13 episodes may be seen as a slight positive, but when compared to its direct competition (AEW Dynamite on TNT), that's a different story. Dynamite aired 12 episodes in the fourth quarter and averaged 900,833 viewers per episode. In terms of head-to-head competition, AEW won out in viewership nine out of the 12 times with NXT winning just two of those nights and one night saw both shows produce identical numbers.

Subscription numbers for the WWE Network continue to go down, even more than originally expected.

There's almost no way those numbers can be spun into a complete positive, but one line that was mentioned in the earnings report was "evaluation of strategic alternatives" for the network and those alternatives are the subject to considerable uncertainty.

This could potentially mean a number of things: further expansion of a long-planned premium tier system, further enhancements to the Network or even a yet-to-be-announcement major change to not only the Network, but WWE's OTT division.

One thing that Vince McMahon spoke on the earnings call was the "selling of our rights to the majors" in regards to certain events and a potential hauling of the WWE Network as we know it. Though "the selling of our rights to the majors" and any similar phrases could mean a number of things and any predictions on the matter would largely be speculatory at this point, one thing that's clear is the idea that the WWE Network is a "must-have" product for the company.

"Nothing is a must-have," McMahon said.

WWE did have a soft launch of a free tier version of the WWE Network, but at this point and time, it's far too soon to determine what impact that has had on WWE's overall numbers and subscriber count. Riddick said once there is good data on the free tier, then the company will put it out there. 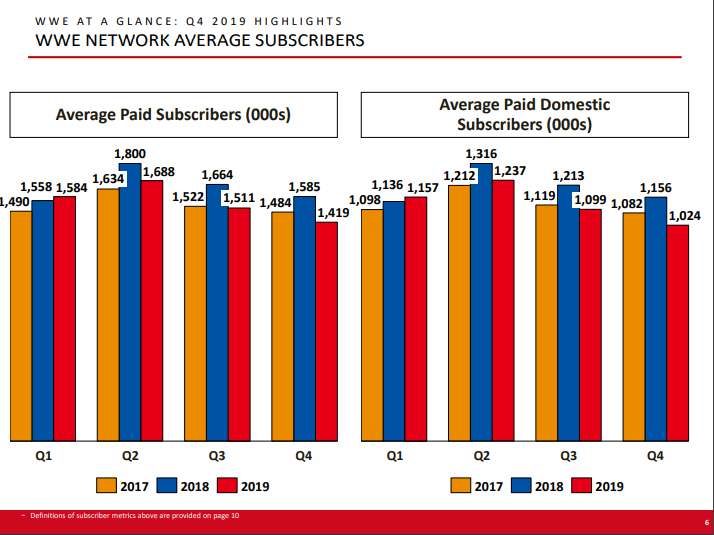 Despite fewer events taking place this year, Riddick assured investors on the call that it had very little impact on the overall OIBDA for 2019.

The loss of dozens of live events for 2019 may not have impacted the overall OIBDA too much, but it did result in a fairly significant drop in ticket sales for the year compared to 2018. In North America, WWE made $17.8 million for the fourth quarter, down from 2018's fourth quarter ticket sales ($19.7 million). Internationally, the ticket sales did see a slight increase year-to-year with 2019's fourth quarter doing $7 million while 2018 saw $6.5 million. 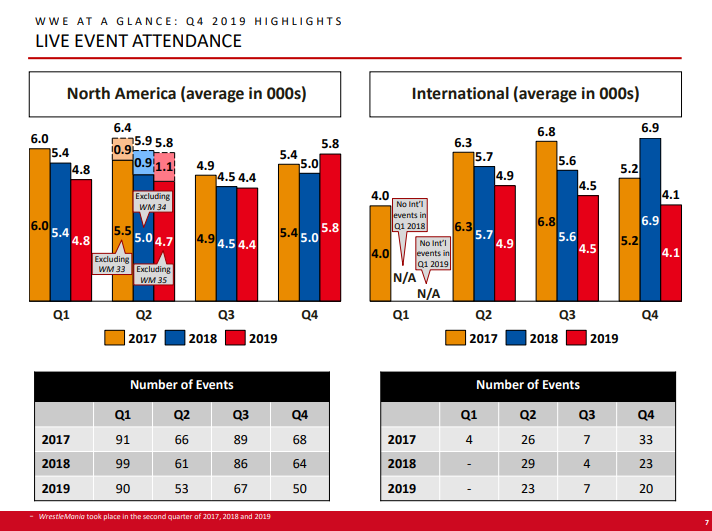 Stock Continues To Go Down:

While the stock stabilized in the last few days after the massive drop due to Barrios and Wilson's departure, the earnings report did little to inspire any confidence of the sort.

Overall, as history has shown, WWE's stock will likely recover long-term, but it will take a new major deal to put the stock right back to its pre-January 2020 price, something that McMahon is teasing that could potentially happen as soon as the first quarter of 2020.

* Although it was not discussed much on the earnings call, WWE 2K20 sales are down, which contributed to a $2 million decrease in consumer products for the final quarter of 2019. The company produced $30.8 million in total revenue for the fourth quarter last year, which is down from 2018 fourth quarter's $32.8 million in that category. For the year, WWE made $91.7 million for the year in that category, down from the $102.6 million 2018 made in total revenue.

* Vince McMahon was asked on the earnings call about talent costs and how it has changed with the increased revenue. McMahon said talent pay has gone up as revenue went up as well, adding that talent get paid a percentage, meaning the more revenue the company makes, the more talent generally get paid.

* McMahon noted that WWE is still searching for people to fill the role Barrios and Wilson left, but did talk about the talent the company does have and his confidence in the management he has in WWE.

* With those changes, however, could come some additional responsibilities for McMahon, at least in the short term. When asked about it, McMahon simply said "I have pretty broad shoulders and I can handle a lot."

* The loss of Mixed Match Challenge on Facebook Watch contributed to a $7 million decrease in the Other category for Revenue.

* On the topic of the XFL, McMahon reiterated that there are no risk of his investment with the football league will impact WWE, something that many investors had been concerned about. McMahon spoke about how the XFL is its own entity and it has its own people running the helm. Riddick added that there are no plans to put the XFL on WWE.