The Spare Room: Don't Do It, Daniel

The last few years of Daniel Bryan's career alone gave us stories and angles that pretty much covered the entire spectrum of emotions. Fans were angry that their guy lost to Sheamus in 18 seconds at *points at sign* WrestleMania 28. They were motivated to root for him during the entire "B+ player" story. They were as genuinely thrilled as could be when he became the WWE World Champion at *points at sign* WrestleMania 30. They were heartbroken when he was forced to retire due to injuries. They were eternally hopeful that his retirement was nothing more than a story advancement, and that he would be returning to the ring. They were saddened once again when they began to realize that his retirement wasn't merely an angle. 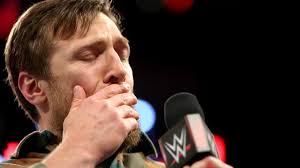 It has been 13 months since he retired, but the conspiracy theorists out there are still saying that Bryan will eventually make his return to the ring. With the invention of Talking Smack, the WWE Network's post-show for Smackdown, we've seen the continuation of the Daniel Bryan/Miz feud we've seen since Bryan made his NXT debut in 2010. Talking Smack tweaks things a bit and leans towards a "shoot" style of interviews, no more so than when Bryan and Miz are getting at each other's throats. For a while now, it seems like WWE has, at the very least, wanted people to think that there was a possibility of Daniel Bryan coming out of retirement for a match against The Miz. Initially, people expected that match to take place at *points at sign* WrestleMania, but then those expectations changed to "eventually". Every week, both Bryan and Miz take all kinds of shots at each other, creating a tense atmosphere and causing viewers to wonder how much of what is being said is a work and how much of it is a shoot.

Last week, Daniel Bryan himself played up the idea of him wrestling again, essentially hinting that his WWE contract is up in about 18 months and that he isn't wrestling right now because WWE won't let him, not because he "can't". Back in September, Dave Meltzer reported that Bryan's contract with WWE expired in 2018, so the timeline matches up there. When Bryan made those comments, he set the internet on fire. Let's look at that "18 month" line a little further, and view the possible scenarios that have been laid out before us.

Scenario #1 - This is going to set up a future match between Daniel Bryan and The Miz: This is the popular choice within the WWE Universe, for obvious reasons. It clearly isn't going to be happening at *points at sign* WrestleMania this year, but there are still plenty of opportunities for it to take place. SummerSlam would be a pretty fantastic time for the heavily hyped return of Daniel Bryan to take place, and the Barclays Center in Brooklyn would probably have its roof blown off with how loud the crowd would be for everything. If we're booking for even further into the future, then *points at sign* WrestleMania would be the perfect spot. Next year's event takes place at the Superdome in New Orleans... home of Daniel Bryan's greatest professional achievement. That would be the perfect way to put a pretty little ribbon on the entire thing, tying up all the loose ends. That story writes itself.

The medical side of this scenario is that, yes, Bryan Danielson's head injuries were 100% legit, but a match at *points at sign* WrestleMania next year would come almost three years to the day after the last match he participated in. Many feel that, with the proper rehab and advances in science and technology, there could be a way for him to wrestle again after taking that much time off. Others feel that a match can be properly put together to minimize the bumps that he would have to take. That might not sound like an exciting, five-star classic of a match, but the live crowd, wherever they might be, would eat it all up with a spoon just to see Bryan back in the ring.

It's not exactly a secret that the man wants to wrestle. It's just about the only thing he has done with his life, and it's all he has ever wanted to do. For as much as it hurt us to see him walk away from the ring, it hurt him ten times as much. Even with the injury history he has, you know that there will be wrestling companies all over the globe tripping over themselves in an attempt to book him for at least one show should he leave WWE. If WWE won't allow him to step in a ring and wrestle again, best believe that someone will, whether it's a good idea or not.

Scenario #3 - He won't return to the ring, but his feud with The Miz will lead to him choosing a surrogate that will wrestle "for him": When this idea began to pick up steam, the name most people were choosing for that role was Samoa Joe, based on his history with Bryan and the fact that Smackdown seemed to provide more opportunities for new names to get some shine. Obviously, the ship has sailed on Joe being chosen to wrestle The Miz in Daniel Bryan's place for the near future, but it's not like there are zero options left. Shinsuke Nakamura, Kassius Ohno, Hideo Itami and Roderick Strong are names in NXT that have connections, one way or another, to Bryan's past and their call up to the main roster can be used in a manner such as this. If you want to dig a little deeper into the fantasy booking world, we're supposed to get another "Draft" this year, consisting of the Commissioners and General Managers being able to choose from the other side's roster of non-protected and non-champion names. Raw has people like Cesaro, Sheamus, Sami Zayn, Seth Rollins and... yes... Samoa Joe that could end up on Smackdown before the year is over, and they all have ties to Bryan, as well. Before you say it, I'm well aware that a match like Cesaro vs The Miz isn't on the same level of excitement generated for many of you that Nakamura vs The Miz would be, but I'm simply covering all bases here.

Scenario #4 - It's pretty much all a work, not leading anywhere, and is just being used to get "buzz" for Talking Smack and Smackdown, as a whole: Sadly, this is probably the most likely of all the scenarios. Are a lot of the emotions displayed on Talking Smack coming from a real place? Of course they are. Are there some truths being told behind all of the anger and bravado? Most definitely. However, Bryan's injuries are far more complex than, say, a broken bone or a torn ligament. It's not something to take lightly, and it's not something you can just come back from with a few months of working out extra hard in the gym and at physical therapy sessions. He had to walk away from in-ring competition for a reason, and that reason doesn't just come and go like a bad headache. Short of the aforementioned advances in science and technology, it's tough to envision a situation where any of WWE's doctors allow Bryan to compete again. Fans of his that haven't already come to terms with these facts probably need to start soon, or they're going to set themselves up for a lot of disappointment in the future.

Scenario #5 - This is going to lead to a turn for either Bryan or The Miz: While I don't believe this is a viable option, I have seen it discussed on social media, so I'm including it here. I've seen one scenario discussed that leads to a heel turn for Bryan, and one that leads to a face turn for The Miz. I know, I know... just roll with it for right now.

The Miz face turn idea is pretty simple. It just sees Miz fighting and scrapping, doing everything he can to prove that the things Daniel Bryan says about him are false, eventually leading Bryan to respect him, and in turn, portions of the WWE Universe to respect him, as well.

The Bryan heel turn is just a little less sane, but this is the way I saw it described... Bryan continues to throw obstacle after obstacle in Miz's path, only for Miz to overcome them all, which leads to Miz earning a one-on-one WWE Title shot at some big event like SummerSlam. During the match, we get a ref bump or some other type of shenanigans, which leads to Bryan coming out in an attempt to set things straight, only to hand Miz a foreign object or deliver some kind of kick to his opponent, etc. Forget the fact that Shane McMahon, as Smackdown's Commissioner, would probably overturn the match result, fire Bryan and make Miz start back at the bottom somewhere. Forget the fact that nobody wants to see Daniel Bryan in a heel role, let alone a heel authority figure role. Forget all of that. I'm merely passing along the things I get to see on social media.

Forgetting about possible scenarios for a minute, I hope this isn't leading to any type of in-ring return for Daniel Bryan. I've long since given up on those hopes and dreams. If it were some sort of an angle, he would have returned by now, obviously. The fact that he hasn't wrestled in two years now screams out everything you need to know. I hate to use this term again, but barring those major advances in science and technology, providing what amounts to a miracle, I don't want to see him return. I have no desire to watch one of my all-time favorite professional wrestlers die in the middle of the ring because he was too stubborn to walk away and stay away. Any week now, he is set to become a father for the first time. How selfish does one have to be to roll the dice on your own life like that when you have a wife and a child to take care of? It would be a dumb decision if he was single with no children. Being in the situation he's in now exponentially increases how stupid a decision it would be to return to the ring.

When Talking Smack first started, I was telling friends of mine that I thought it was all going to end up being pointless. The stuff with Bryan and Miz was entertaining, and it was going to keep people tuning in, but it wasn't ever going to go anywhere further than that, and it's going to make a lot of people sad, at best, and at worst, mad. I just don't see any way Bryan wrestles in a WWE ring again, and God help her, but I would hope that Brie Bella can talk (or slap) some sense into her husband if he's even thinking about wrestling somewhere next year when his contract is up.

We'll always have the WWE Network and independent DVDs.